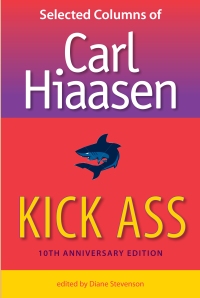 Carl Hiaasen, a best-selling author who virtually invented the Florida Noir mystery genre, has won the 2011 Florida Lifetime Achievement Award for Writing. The award will be presented on March 23 in Tallahassee at a special luncheon held at the Governor’s Mansion.

A Florida native who began as a Miami Herald reporter at age 23, Hiaasen has received wide recognition in journalism, commentary, and literature. He has published both fiction and nonfiction, and his work has been translated into 34 languages. Hiaasen, who turns 58 on March 11, has produced a dozen novels, three books for young readers, two works of nonfiction, and two collections of his Miami Herald columns—which he still writes on a weekly basis.

“With their ripped-from-the-headlines timeliness, Hiaasen’s novels are hilarious, insightful and firmly rooted in Florida,” said Janine Farver, executive director of the Florida Humanities Council, which originated the award last year, oversees the nomination process, convenes a panel of independent judges, and announces the winner. The Florida Humanities Council is the statewide, nonprofit affiliate of the National Endowment for the Humanities.

In selecting Hiaasen from what they described as “a very strong field of nominees,” the judges said they were impressed not only by the breadth of Hiaasen’s work in both journalism and literature, but also by the impact it has had.

“Despite a distinguished pool of nominees, Carl Hiaasen emerged the committee’s choice when considering the overall quality and variety of his journalism, editorial writing, and popular fiction and, no less, its importance,” the judges wrote. “Hiaasen’s writing embodies a consistent, often inspired, voice for preserving and protecting Florida and Floridians.”

The University Press of Florida (UPF), publisher of some of Hiaasen’s books, nominated him for the award.

“If bestselling author Carl Hiaasen had never been born, we might have had to invent him,” stated the UPF letter of nomination. “His columns, novels and nonfiction—based on sensitive reporting, an eye for colorful characters, an ear for authentic dialogue, and an insightful interpretation of the world—simultaneously call attention to the underbelly of Florida politics and culture even as they romanticize the state as an exciting place to live.”

In 2010, Hiaasen received the Ernie Pyle Lifetime Achievement Award from the National Society of Newspaper Columnists for writing with “wit, style and an abiding sense of justice.” His work has also appeared in many well-known magazines, including Sports Illustrated, Playboy, Time, Life, Esquire and even Gourmet.

Hiaasen has also received numerous state and national honors, including the Damon Runyon Award from the Denver Press Club and the Rebecca Caudill Young Readers’ Book Award. His 2002 book Hoot won the Newberry Award from the Association for Library Services to Children.

A University of Florida graduate, Hiaasen rose through the newspaper ranks from general-assignment reporter to the Herald’s prize-winning investigations team. He became a regular columnist in 1985; one year later his first solo book, Tourist Season, became a national best-seller. Its zany humor and oddball characters set the tone for Hiaasen’s other Florida Noir novels. Double Whammy followed and since then, there have been nine others: Skin Tight, Native Tongue, Strip Tease, Stormy Weather, Lucky You, Sick Puppy, Basket Case, The Downhill Lie, Nature Girl and Star Island. Strip Tease became a New York Times bestseller, and in 1996 was made into a major motion picture starring Demi Moore.

Before he launched his career as a solo novelist, Hiaasen co-wrote three mystery thrillers with the late William Montalbano, a good friend and distinguished journalist.

In addition to Hoot, Hiaasen’s popular books for young readers include Flush (2005), which tells a pro-environmental story about a casino ship polluting the ocean, and Scat (2009), a humorous mystery set in the Everglades.

Hiaasen’s nonfiction has wielded great influence in defining what makes Florida uniquely Florida. His work includes Team Rodent: How Disney Devoured the World (1998) and Downhill Lie: A Hacker’s Return to a Ruinous Sport (2008). The readership of his newspaper columns expanded with the publication of two collections, Kick Ass (1999) and Paradise Screwed (2001). As a newspaper columnist, Hiaasen has become known for his passionate conviction and willingness to confront powerful interests in pursuit of the public good.

The Florida Humanities Council, established in 1973, uses the disciplines of the humanities to develop public programs and resources that explore Florida’s history, literary and artistic traditions, cultural values, and ethics.

The members of the judging panel are: Tara Zimmermann, Literary Events Coordinator at the Florida Center for the Book; John Fenstermaker, who is Fred L. Standley professor of English emeritus at Florida State University; Colette Bancroft, Book Editor at the St. Petersburg Times; Lester Abberger, board member of the Florida Humanities Council; and Gary Mormino, who is Frank E. Duckwall professor and Director of the Florida Studies Center at the University of South Florida St. Petersburg.