Decadence, Excellence & Architecture – Another Lesson from the Maya 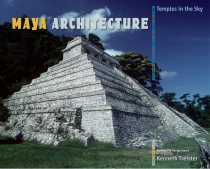 Maya Architecture: Temples in the Sky

Best known as the sculptor of the Holocaust memorial in Miami, Kenneth Treister turns his expertise of architecture toward the Maya and draws new conclusions about the collapse of their society. In the process, he identifies striking potential parallels to modern day economic concerns and shows how contemporary architects such as Frank Lloyd Wright were deeply influenced by Maya design principles.

Of the Maya’s architectural excellence, which have impressed and fascinated people for centuries, Treister says: “The pride, hubris and egotism created among the ruling elite by their magnificent cities and architecture caused an economic collapse, where a disproportionate allocation of resources was directed to the building process. In addition, there was an ecological collapse because this consummate building and the expansion of their cities created a vastly unsustainable ecological calamity. Perhaps this is a lesson for Miami, a city that is being continuously expanded and reborn.”

The astonishingly well-conceived urban planning and the breath-taking quality of Maya architectural design are captured throughout in a number of full-color photographs, many taken by the author on his trips to study the ruins. Examples of Frank Lloyd Wright’s work are provided for comparison. Readers will easily be able to see similarities in style and form, especially in the images of Wright’s “Textile Block Houses,” which were built in California in the 1920s. Also included is a foreword from George E. Stuart, former senior assistant editor for archaeology for the National Geographic Society.

Kenneth Treister, FAIA, is an architect, sculptor, photographer, artist, and lecturer. He has received numerous awards for his architectural and sculptural designs and is coauthor of Havana Forever: A Pictorial and Cultural History of an Unforgettable City.