LBJ – The Right Man, in the Right Place, at the Right Time

Available now, Freedom’s Pragmatist: Lyndon Johnson and Civil Rights is an eye-opening study of the southern president who came to be a seminal figure of the civil rights movement. 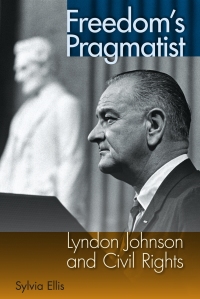 University Press of Florida (UPF): When did you know that you wanted to write this book? What led you to this subject/area of research?

Sylvia Ellis (SE): I wanted to write this book after I’d completed my first monograph, Britain, America, and the Vietnam War (2004).  Research for that book led to a fascination with LBJ – his use of power, his complex personality, the competing pressures of domestic and foreign policy – and this connected to earlier work I’d done on civil rights.  I’d worked with some of Britain’s leading civil rights historians during my Masters – Anthony Badger and Brian Ward in particular – and they convinced me that I should turn my attention to the story of Johnson’s civil rights journey as there was no single volume that traced this from his childhood in Texas to his time in the White House.

UPF: How is your day structured when you write? What’s your writing routine?

SE: My day rarely has structure!  As a university professor with management and teaching duties, and as mother of three children, research and writing is carried out in fits and bursts!  I have, however, been well supported by my institution, Northumbria University, who provided two research sabbaticals (one for the research and one for the writing-up stage) so that I could complete the project in a timely fashion.   I tend to write at home surrounded by my printed documents and books but also because there are few disturbances.  I’m also an evening person so do much of my writing into the small hours.

UPF: What parts of your book will most surprise readers?

SE: I think lay readers will be surprised by Johnson’s lifelong efforts on behalf of African Americans, although for political reasons these were often in private.   My emphasis on the importance of great leaders at key junctures in history may also surprise some, although this is by no means ‘great man’ history!

UPF: There have been some major bios of LBJ – how did you shape your own book within that framework and hone your focus?

SE: Although there have been several biographies of LBJ, and a number of works that studied elements of LBJ’s actions on civil rights, I was interested in the evolution of his journey – how a seemingly southern segregationist could transform into the most committed civil rights president – and wanted the reader to be able to consume this in one digestible volume.

UPF: There’s a saying “Only Nixon can go to China.” Could anyone other than LBJ have passed Civil Rights legislature at that point in time?

SE: A tricky counterfactual question!  Certainly others would have attempted to go in the same direction but they may not have gone as far as LBJ.   Being from the South certainly gave him insights into the anxieties of those resisting racial change – and he was certainly protective of the region’s reputation – but he also came to understand that the region and the nation had to address the issue of racial equality in order to move forward as a strong democracy.  His lengthy career in the House and the Senate, and his successful spell as House Majority leader in the 1950s, meant that he was a master tactician when it came to securing legislation and his ability, with the aid of Hubert Humphrey, to negotiate with southern Democrats, northern liberals, and Republicans, was essential in securing passage of the Civil Rights Act in July 1964 without weakening its provisions.  When it came to building on that Act Johnson’s forcefulness and vigor may not have been matched by other presidents.  Ironically, JFK’s inspirational qualities led him to gain more credit for his promises on civil rights than his successor did for his many achievements – three civil rights bills, including a landmark voting rights act, the appointment of the first African American supreme court justice, Thurgood Marshall and the first black cabinet member, Robert C. Weaver, executive orders that laid the groundwork for affirmative action, and numerous Great Society programs on education, housing and poverty that benefitted many African Americans.  Certainly Kennedy had a degree of vision on civil rights once he was president but LBJ was the president who was able to deliver much of it.  As others have said, Johnson was certainly the right man, in the right place, at the same time.

UPF: What is your take on how LBJ may have reacted to the recent Supreme Court ruling on the Voting Rights Act?

SE: Johnson probably viewed the Act as one that should be time limited – certainly he would have hoped that the South would no longer be marked out as a region of racial strife fifty years after its passage – as he would have hoped that the protections against disenfranchisement would not be necessary forever.  However, I think he would have been alarmed at the indications that the provisions of the Act are still necessary (and not just in the South) and would have therefore argued strongly for the continuance of Justice Department monitoring of elections.

UPF: What do you hope readers will enjoy the most about your book?

SE: The fascinating story of Johnson’s struggle to balance his personal beliefs on race – grounded amongst other things in a natural compassion for the oppressed and impoverished – with the political realities of representing a state, a region, and ultimately a nation that was deeply divided on the issue of racial equality.  Johnson’s pragmatic political instincts and his ambition to achieve high office meant that he worked closely with powerful but racist Southern at the same time as being increasingly influenced  by racial liberals and  the growing radicalism of the civil rights movement.  Ultimately, as president, Johnson was forced to break with many of his Southern colleagues, and indeed threaten the future of the Democratic Party in the South, in order to ensure the passage of effective civil rights legislation to end segregation and address the disenfranchisement of African Americans.  The book shows how this extraordinary act of political courage, from a politician who had appeared to be a Southern segregationist for much of his career, is best understood by tracing LBJ’s uneven personal and political journey on civil rights.  Readers will also enjoy the complex and often tense relationship between Johnson and the leaders of the civil rights movement, including Martin Luther King, Jr. and Roy Wilkins, as they worked towards the goal of justice at differing speeds and via sometimes conflicting methods.

People who really liked The Bystander by Nick Bryant  should enjoy this book.

UPF: What are you currently reading?

SE: I am currently reading Empire of Ideas by Jeremy Hart.

UPF: Who are your favorite authors, and how have they influenced or informed your own work?

SE: George Orwell is one of my favorite authors and his guidance that good prose should be like a windowpane has always stuck with me.  In other words, writing should be clear and shouldn’t mask the subject.  My writing for this specific book has been influenced most by the work of those who help train me as a historian – Anthony Badger and Brian Ward – who influenced my understanding of the American South, Southern Democrats, and the civil rights movements.

UPF: What are you working on next?

SE: I’m working on a number of smaller articles on LBJ and JFK –mostly related to their presidential records – but my next big project is on public diplomacy and Anglo-Americans relations.

Do you have one sentence of advice for new authors?

Always work on topics that you will never tire of!