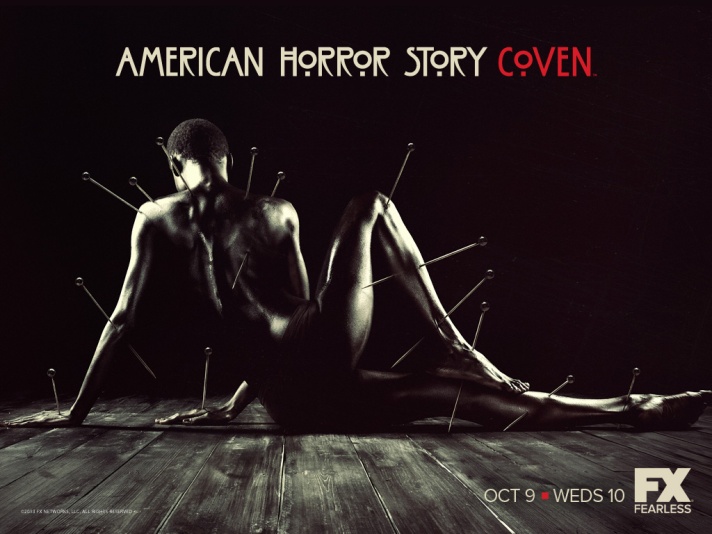 Who will be the next Supreme? Tonight’s season finale of American Horror Story: Coven is guaranteed to be action packed and full of surprises. Carolyn Long offers up another fascinating primer on the crossover and parallels between history and the gore-filled, betrayal-fueled world inhabited by the characters of Coven, this time focusing on episodes 10 and 11.

The show took a month’s break during the winter holidays. Absence makes the fans grow fonder! January episodes show the development of an alliance between Marie Laveau and Fiona Goode,  Madame Lalaurie reverting to her former evil ways, and the introduction of Papa Legba who, while not a historical person, is an important member of the Voudou pantheon.

Shaken by Hank’s fatal attack at her beauty salon, Marie Laveau  comes to Miss Robichaux’s to make an alliance with Fiona to combat the witch hunters. She tells Fiona, “I’ve been alone for so long, it was a relief to find an equal, even if that person comes in the guise of an enemy…. I’m over 300 years old; everybody I cared about has followed after the grim reaper.”

That night Marie is awakened by the hovering shadow of Papa Legba. He whispers to Marie that he “wants what’s coming to me, you must pay my price. It is the bargain we made so long ago.” Legba (Lance Reddick) is a seductive but terrifying figure. He has red eyes, dark skin covered with ashes, long fingernails, flowing dreadlocks, a necklace of animal bones, and a top hat with a headband adorned with skulls. Marie dashes out into the night and enters a maternity hospital, where she snatches a dark-skinned newborn baby girl. The baby, an “innocent soul,” is her required annual offering to Legba.

Fact Check: In Voudou iconography, Papa Legba is the guardian of the crossroads who opens the gate between the human and the spirit world. He is usually depicted as a sturdy and dignified old black man wearing a straw hat. The makeup and costuming of the Papa Legba character on Coven looks more like Baron Samedi, who governs death, the cemetery, and sex, but even the Baron is considered more comical that evil. Neither of these Voudou deities would ever require the sacrifice of an innocent soul. The American Horror Story script writers have conflated the much-beloved Papa Legba with the Faustian myth of selling one’s soul to the Devil in return for power, knowledge, beauty, or immortality. Legba, because of his association with the crossroads, has sometimes been identified with the legend of the great Mississippi bluesman Robert Johnson selling his soul to the Devil at the crossroads (as in, for example, the 1986 film Crossroads).

Fiona asks for Marie’s secret of eternal beauty and immortality. Marie confesses that she struck a deal with Papa Legba. She flashes back to the 1820s, when she had just given birth to a daughter with Bastien. On the anniversary of her first meeting with Papa Legba, he comes to collect her baby. Marie weeps as she hands the child over to him. Fiona asks if she could summon Papa Legba and make a bargain with him. “Oh yes,” answers Marie, “if you want him bad enough, he’ll hear you.” Legba appears to Fiona, saying he wants her soul. Fiona tries to establish terms: “life everlasting, no aging, no decrepitude.”Legba states his own terms: “one night a year, on the date of my choosing, I require certain services.” “Whatever it takes,” answers Fiona. Legba kisses her, then draws back. “The deal is off. You have nothing to sell, you have no soul.”

Nan hears crying and finds the kidnapped baby in the armoir. She intends to return the infant to the hospital, but Marie and Fiona order her away. Marie voices regret at sacrificing her own daughter; she would like to keep this child but must furnish Legba with an innocent soul. Fiona sees this as an opportunity to get rid of Nan and appease Legba, so Marie and Fiona drown Nan in the bathtub. Nan’s soul goes to Legba, who embraces her, saying “Come, child…you will find that the other side is filled with treats for a girl like you.” She walks away with him, smiling.

The apparent civil rights “education” of Madame Lalaurie in the episodes before the holiday break are negated in the January episodes. In a flashback to the 1820s, Delphine and her daughters have just returned from Paris. Delphine is bored and looking for something to stimulate her senses. Because the kitchen staff is absent, she has to kill a chicken for their dinner. She bathes her fingers in the blood and smiles with satisfaction. Later that day, a slave falls and hurts himself, and Delphine goes to tend to him. She again dips her fingers in the blood while the man screams. She ties him up, suspended by the hands, and cuts him until the blood flows. Delphine has found her new purpose in life.

Fact Check: Nobody knows exactly when or why Madame Lalaurie became a slave abuser, but rumors began to circulate shortly after she married Louis Lalaurie in 1828. She was investigated several times by city authorities, and there is documentary evidence that in 1829 her attorney defended her before the criminal court. Lalaurie abandoned her to live in rural Plaquemines Parish, where he may have been a plantation doctor, and Delphine sued for a legal separation. This loss of control over her young husband may have pushed the mentally unstable woman over the edge and resulted in the outbursts of temper that led her to commit hideous acts against the slaves over whom she still had power.

The residents of Miss Robichaux’s attend Nan’s interment in a New Orleans cemetery. Queenie arrives, leading Delphine on a leash. Queenie, through the power of resurgence,  has not only survived her own shooting, she has reconstituted Delphine’s dismembered body. Delphine, once again the maid at Miss Robichaux’s, is doing laundry, cleaning the bathrooms, serving at the table, and caring for the kidnapped baby. James, the black gardener, cuts his hand with the pruning shears and Delphine offers to tend to his wound. Delphine realizes “what’s been missing in my life, what it was that fed my soul back then.” She takes James to Spalding’s creepy attic room and ties and gags him. In her earlier life, she “ liked to see how my niggers ticked. I had a fascination with their body parts. Their cries of agony make a strange, almost comforting sound, and that thick African blood satisfied a desire that was deep inside me.” She starts playing “this little piggy” with James’s toes, and cuts one off. By later that day, the man is dead, covered with blood, with his intestines pulled out.

Fact Check: The 1834 newspaper articles and other contemporary accounts of the Lalaurie incident describe slaves who had been starved, beaten, chained, fitted with heavy iron collars, bound in constrained postures, and suspended by the neck with their arms and legs stretched. Madame Lalaurie is reported to have inflicted many terrible abuses, but not to have cut off toes, gouged out eyes, pulled out intestines, or many of the other disgusting tortures depicted in Coven. Many of these sensationalist descriptions of torture originate with Jeanne Delavigne’s chapter, “The Haunted House of the Rue Royale,” from her 1946 collection Ghost Stories of Old New Orleans.

Fiona and Marie work a magic spell against the witch-hunting Delphi Trust, causing FBI agents to swarm into Delphi’s headquarters and seize their assets. Harrison Renard (Hank’s father) and other Delphi board members meet in New Orleans with Fiona and Marie to arrange a truce. They argue over terms. A bloodbath ensues when the unidentified bartender who has been serving them is revealed to be the Axeman, and at this point he attacks, killing all but Mr. Renard. He passes the axe to Fiona, and she decapitates the witch hunter. She and Axeman embrace. Thus the stage is set for the season finale – which will be a spectacle of entertainment, to be sure!

Check back later this week to see Carolyn’s take on the season finale.

Carolyn Long retired from the National Museum of American History in 2001. She is the author of A New Orleans Voudou Priestess: The Legend and Reality of Marie Laveau and Madame Lalaurie, Mistress of the Haunted House. She lives in Washington, D.C., and New Orleans. 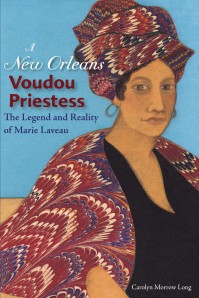 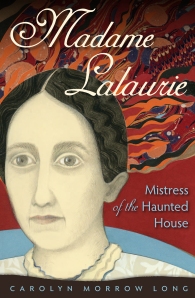