Gainesville, FL—Exciting changes have been afoot in the acquisitions department at University Press of Florida (UFP). We are incredibly pleased to announce the promotion of Erika Stevens and Shannon McCarthy as well as the addition of new staff members Stephanye Hunter and Alexa Zelinsky. “The enthusiasm and skill level of these four individuals is impressive. We are excited to be back up to full staffing levels in the department for the first time since the economic collapse of 2008, and we can’t wait to see what the future holds with this extremely talented team,” says Director and Interim Editor-in-Chief Meredith Morris-Babb.

Erika Stevens joins UPF full-time as Senior Editor, building on her work as editor-at-large. Stevens will continue acquiring titles in Latin American and Caribbean studies with the addition of anthropology and dance. No stranger to the university press community, Stevens was previously acquisitions editor at the University of Georgia Press in the areas of American studies and creative writing, as well as national and regional trade titles. Her career in academic publishing began at Duke University Press and the University of North Carolina Press. She is owner-operator of Quick Bread Editorial and poetry editor at large for Coffee House Press.

Shannon McCarthy has been promoted to Assistant Editor due to her outstanding contributions over the last two years. McCarthy earned her bachelor’s degree in journalism from the University of Florida in 2008. Prior to joining UPF as a part-time acquisitions assistant, she worked as a freelance sportswriter and nonfiction editor. Since 2012, her responsibilities have evolved to include her own acquisitions. As Assistant Edtior, McCarthy will oversee the literature and literary criticism portions of UPF’s list, especially modernism and medieval literature. In her spare time, she enjoys attending Gator sports events, reading, and taking day trips to the springs or the beach. 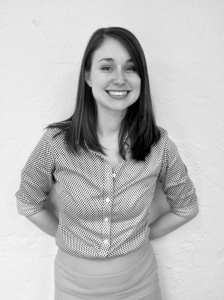 Stephanye Hunter comes to UPF as Acquisitions Assistant having recently completed her M.A. in Middle Eastern Studies at the University of Texas, Austin with an emphasis on Israeli and Palestinian literature and Hebrew language. She has an M.A. in English from North Carolina State University. Hunter has interned at both the University of North Carolina Press and the University of Virginia Press and worked at the Papers of George Washington. She will be assisting Senior Editors Sian Hunter and Erika Stevens. Stephanye has lived in Israel, where she began studying Hebrew, and traveled in the West Bank and Jordan. She has also worked for a nonprofit assisting LGBTI refugees. When she isn’t at UPF, she can be found with her dog, Rosalind.

Alexa Zelinski completed her acquisitions internship at UPF by accepting the role of Rights and Permissions Coordinator. Zelinski recently completed her bachelor’s degree in English at the University of Florida with minors in business administration and anthropology.