Congratulations to Bob Kealing, author of Tupperware Unsealed: Brownie Wise, Earl Tupper, and the Home Party Pioneers. According to the Hollywood Reporter late Friday evening, Sony Pictures outbid Warner Bros. and Paramount to acquire the rights to Kealing’s book. The movie will be directed by Tate Taylor (The Help) and will star Sandra Bullock in her first role since her Oscar-nominated performance in Gravity.

“I’m honored that two artists at the top of their careers like Sandra Bullock and Tate Taylor are embracing this story,” Kealing told the Orlando Sentinel on Saturday.

Tupperware Unsealed tells the story of Brownie Wise, the first woman to appear on the cover of Business Week.  A trailblazing businesswoman decades ahead of her time, Wise created the Tupperware “home party” phenomenon in the 1950s, making Tupperware a household name and sparking a cultural revolution in post World War II America. 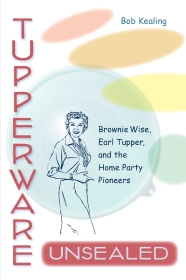 Wise’s drive and creativity fueled sales and profits for the once sleepy plastic containers company, and Earl Tupper anointed Wise as the company figurehead and marketing guru. Long before Disney, her lavish national headquarters drew tourists from near and far to the outskirts of Orlando, Florida, where she held court with the press, politicians, and movie stars.

Fired under mysterious circumstances at the height of her celebrity, Brownie Wise was written out of Tupperware history and died in obscurity. Wise’s rise and fall, and her relationship with the eccentric Tupper, is the stuff of legend; a story told fully in Tupperware Unsealed and soon to come on the big screen.

Bob Kealing, an Edward R. Murrow and three-time Emmy award-winning reporter for NBC’s WESH-TV in Orlando, is the author of Kerouac in Florida and Calling Me Home: Gram Parsons and the Roots of Country Rock.

It's #NationalInternDay and we're highlighting three of our amazing #BookPublishing interns, all former or current students at @uflorida. Click the link in our bio to read guest posts from each person on our blog!
Loading Comments...
%d bloggers like this: