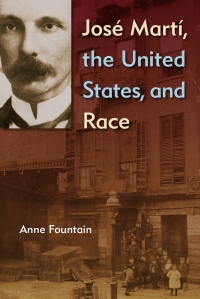 “Essential reading for those who increasingly appreciate the enormous importance of Martí as one of the nineteenth century’s most influential and most original thinkers.”—John Kirk, coeditor of Redefining Cuban Foreign Policy

A national hero in Cuba and a champion of independence across Latin America, José Martí also spent time in the United States where he encountered the labor politics surrounding European immigrants, the hardships of Chinese workers, the oppression of Native Americans, and the adversity faced by newly freed black citizens. In this book, Anne Fountain looks at Martí’s attitudes and his writing from this time—including his famous essay “My Race,” written in New York City near the end of the nineteenth century. Fountain argues that it was in the United States that Martí fully engaged with the specter of racism.