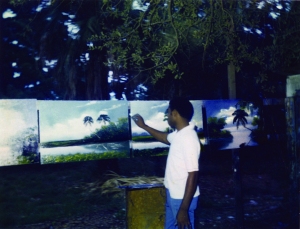 In 1960s Ft. Pierce, Florida, a group of 26 self-taught African-American artists sold their 24” x 36” Upson board paintings out of their car trunks. Even without a name for themselves, they made a living by painting landscapes in their backyards and selling them on the highway. Only decades later, in 1994, did these painters become recognized and lauded as “The Highwaymen,” the creators of over 100,000 oil paintings.

The Highwaymen might never have started without the guidance of A. E. “Bean” Backus, a white painter of classic Florida landscapes. Backus offered sage advice to the original Highwayman, Harold Newton: paint landscapes. Able to copy any piece he saw, Newton tried to replicate the same beauty he saw in Backus’s landscapes. Despite Newton’s success, no one championed him, and he sold his work in the streets instead of galleries, paving the way for the Highwaymen’s ingenious sales method.

Backus’s student Alfred Hair followed a similar path. Just like Harold Newton, Hair could paint gorgeous scenes, but he knew no one would pay top dollar for his work. He realized that if he painted as fast as possible, he could charge just $25 per piece and still earn a working-class pay. 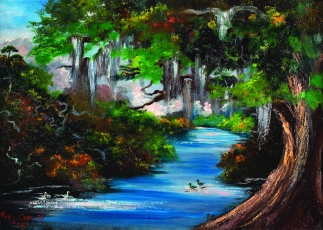 Newton and Hair taught their friends how to paint so that they could leave labor work behind. Many copied Hair’s rapid-fire technique, churning out paintings one after another. Backus, who mentored these fledgling artists, often yelled for them to slow down, but speed was their trademark.

Just by looking at a Highwayman painting, no one would ever guess that these landscapes were completed in minutes. Instead of trying to emulate Backus, the Highwaymen defined their own style of landscape painting with lively brushstrokes and hasty palette knife work. The result? Masterpieces reminiscent of the fleeting sunsets and vistas captured in each painting.

Only Harold Newton maintained a slow pace that allowed him to master Backus’s style. His creations provided a target the other Highwaymen strove to hit, but could never quite meet. In Harold Newton: The Original Highwayman, photography and fine arts professor Gary Monroe notes, “Newton embodied the enigmatic quality that marks the romantic notion of artists.”

Still, the other Highwaymen’s hallmark art attracted an impressive audience. While Newton’s paintings symbolized Floridian life, the other Highwaymen’s creations evoked the essence of the state. Together, Newton and his comrades captured the spirit of Florida. “The Highwaymen’s work became a popular representation of how Floridians wanted to see themselves and how they wanted others to see the state,” explains Monroe in The Highwaymen: Florida’s African-American Landscape Painters. “From the late 1950s into the early ’80s these colorful landscapes were ubiquitous decorations in Florida homes, offices, restaurants, and motel rooms. They shaped the state’s popular image as much as oranges and alligators,” the New York Times noted in praising the book.

The 1980s brought a shift in culture, and demand all but disappeared for Highwaymen landscapes. With little to sell, Highwayman Al “Blood” Black began promising paintings on commission so that he could make money quickly, never creating the pieces people paid for. It was these lies that led to his 12-year sentence behind bars.

Six months into Black’s sentence, Jeff Klinkenberg published an article profiling the Highwaymen in the Orlando Sentinel. Passed on from a prison nurse, the article made its way into the hands of the warden, who told Black he would soon be painting again.

Under the warden’s direction, Black entered restricted prison areas and was taken from one institution to another to paint murals. Before Al Black, the Highwaymen never painted murals. But by the time Black finished his sentence, over 100 of his most notable works covered cinderblocks, support pillars, and sliding cafeteria gates throughout four prisons of the Florida Department of Corrections.

The only existing Highwaymen murals, these invaluable works might never exist outside these institutions, and may never join the thousands of Highwaymen paintings on display across the US.

Recently, one of these prisons closed, and a Tampa developer purchased the land. No one knows the fate awaiting the Hillsborough Correctional Institution. If the site is demolished, Black’s work will become rubble. Al Black told reporter Keith Morelli of the Tampa Tribune that he hopes somehow, someway, the paintings might be preserved.

The only place where these one-of-a-kind treasures may last forever is in Gary Monroe’s The Highwaymen Murals: Al Black’s Concrete Dreams, a book celebrating Al Black and sharing his prison work with the public for the first time.

Monroe’s new book, Mary Ann Carroll: The First Lady of the Highwaymen highlights another little-known story: the life of the only Highwaywoman.  Published by the University Press of Florida on October 7, 2014, the book recounts how 16-year-old Mary Ann Carroll met Harold Newton on the side of the road, was instantly welcomed into the group, and battled sexism and discrimination on her journey to becoming a renowned artist.

Mary Ann Carroll’s paintings and those of the 25 Highwaymen once sold for $35 at most. Now, collectors pay thousands of dollars to own these vibrant landscapes, recognizing their place in Florida’s culture, history, and identity. As Monroe states, “These paintings symbolized how the American Dream was realized in the Sunshine State.” They deserve to be cherished.