7 Wonders of the Everglades (And How to Help Them!)

Marketing intern Micole Kaye worked closely with Mac Stone’s Everglades: America’s Wetland during her internship at the University Press of Florida and discovered some amazing facts about America’s largest wetland. Below she shares some of the wonders you can find in the largest subtropical wilderness in the United States.

“One way to open your eyes is to ask yourself, ‘What if I had never seen this before?
What if I knew I would never see it again?’”
—Rachel Carson

Who would have thought there were bears in Florida? Not me! Apparently, there used to be a lot more. But due to land destruction and development, these beauties spent 38 years on the endangered species list, having been reduced to just 300 in number. In 2012, the species finally

reached a healthy enough population at 3,000 and were removed from the list of Florida’s endangered animals.  It seems that they have finally reached some recognition as an important species to the environment, and some ranchers in the northern Everglades even let these furry friends roam freely on their land.

Alligator apples are the fruit of the pond-apple tree. The fruit got its name because it is mostly eaten by alligators. Yet many species can survive in the crevices within the branches, trunk, and roots of these trees. Pond-apple trees used to be plentiful among the Everglades. However, there are only a few left due to destruction of the Everglades. Settlers learned that the soil beneath these trees proved especially fertile, and they uprooted the species that once stretched fifty miles along Lake Okeechobee. Very few remain, but those that do teem with life—a sign that a healthier population of the species could in turn improve the outlook of other creatures’ populations.

Herons and egrets stab at prey with their sharp beaks. But spoonbills, named for their spoon-shaped bills, can’t pierce prey with their blunt beaks. Ergo, to eat, they spin a whirlpool in the water to sweep small fish and crustaceans into their 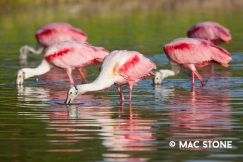 mouths–a method called “tactilocation.” Yet these birds have faced much bigger challenges. In the 1930s, poachers looking to make money for the beautiful pink feathers hunted the birds until only 5 nesting pairs were left. Legislation finally passed to stop the plume trade, and the Audobon helped bring the population back into the thousands. Yet spoonbills needed protection from more than just poachers. Canal systems built in the 1980s destroyed the spoonbill habitat, again endangering the species and sending the population into steep decline. In 1984, only 400 pairs remained. In 2011, only 87. And because the species is a barometer for the Everglades ecosystem, their absence is a reminder of just how fragile the wetland is. State and federal agencies are now trying to fix what has been destroyed, but the population is still far away from its once abundant glory.

Most Floridians rely on hurricane shutters for protection. However, the Everglades relies on the

mangrove trees. Strong mangrove roots dig deep into Florida waters and keep strong winds and storm surges from damaging the Florida coast.  There are three kinds of mangroves—red, black, and white—essential to Florida ecology. Such is why the mangroves in the Everglades are the largest continuous group of protected mangroves in the Western hemisphere.

Alligators are descendants of prehistoric creatures that roamed the Earth with dinosaurs. Existing today almost exactly as their ancestors, alligators are still perfectly suited to their environment. Throughout 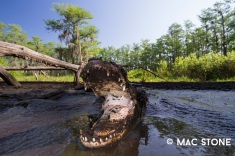 their 65 million years on Earth, their most formidable opponent has been humans. In the 1960s and 70s, humans hunted alligators until their population was severely damaged. Recent governmental restrictions have allowed their population to bounce back, which is important because biologists use alligators as their main indicator of ecological health.

The Everglades snail kite relies on just one source of food: the apple snail. Yet these snails spend so much time underwater that it would seem impossible for these raptors to find any food at all. But in order to breathe and lay eggs, apple snails must breach the water, giving snail kites the opportunity to swoop down on their prey. Snail kites, however, require not only that they find these hidden snails but also that these snails exist. With the tumultuous water quality in the Everglades, the apple snail population can dip dramatically, thereby threatening the majestic snail kite.

It would seem strange to talk of water as a wonder, but when you think about all of the above wildlife, the survival of every one depends upon the health of the water. When you think about how much the Everglades has changed, so many of those transformations have been the result of the water supply. For one, there are over half a million melaleuca trees in South Florida, which settlers brought to drain the water from the Everglades. These trees have created unnecessary competition for native organisms and have diminished such populations greatly. Now, we can’t figure out how to get rid of the invasive melaleuca, which continue to deprive the wetland of its most necessary resource. Furthermore, the Everglades water sources, such as Lake Okeechobee, have been used as water supplies for Florida’s developing industries. These industries take the Everglade’s precious water and send excess rainwater tainted with fertilizers back into the Everglades, affecting the entire environment. With such drastic changes in the water, the Everglades has changed entirely, with populations of species, such as the snail kite, drastically reduced.

HOW YOU CAN HELP!

With Everglades: America’s Wetland, Mac Stone hopes to raise awareness of the beautiful Everglades and to spark interest in protecting it. In the book, he details five ways you (yes you) can help save what is left of this natural ecosystem.