New Paperback Release: The Odyssey of an African Slave 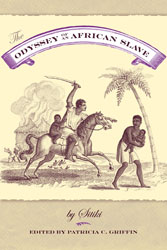 “This is the only known slave memoir from Florida . . . A fine addition to slave narrative reading lists.”—Library Journal

“The publication of a heretofore unknown slave narrative is significant, even more so when the subject was also a victim of the trans-Atlantic slave trade . . . [Sitiki] should become another well-known name on our list of enslaved voices from the Americas.”—Journal of Southern History

“Gives voice to an individual who entered the world as a free man named Sitiki in coastal West Africa during the 1790s and departed it more than eighty years later in St. Augustine as a Methodist minister and community leader.”—Florida Historical Quarterly

Discovered as a hand-written document in the Buckingham Smith Collection at the New York Historical Society, The Odyssey of an African Slave traces the life of Sitiki, whose name was changed to Jack Smith after his enslavement in America.

Captured and sold into slavery in Africa as a five-year-old, Sitiki traveled to America as a cabin boy and eventually gained his freedom after the Civil War. He went on to become the first black Methodist minister in St. Augustine, Florida. Ultimately experiencing five slave systems—African, British, Old South, New English, and Spanish—Sitiki’s life was remarkable.

With analysis of other historical material from the same era, historian and anthropologist Patricia Griffin provides context to Sitiki’s life and  sets the tone without adding bias or embellishment to this already dramatic account.

Sitiki wrote his memoir between 1869 and 1871 with the assistance of historian Buckingham Smith, his former master. Patricia C. Griffin is the author of Mullet on the Beach and the editor of Fifty Years of Southeastern Archaeology.

One thought on “New Paperback Release: The Odyssey of an African Slave”