In Skyway: The True Story of Tampa Bay’s Signature Bridge and the Man Who Brought It Down author Bill DeYoung tells the story of the worst ship-bridge collision in U.S. history.

An intimately detailed account of this disaster,
its victims and the survivors, the legal aftermath, as well as a complete history of the bridge,
old and new. . . . Reads like a novel.
—Florida Times-Union

Takes us into the thoughts and emotions
of the principal players as the unfolding calamity is perceived too late in the fury
of a sudden, blinding rainstorm.
—Florida Weekly

Tell[s] how multiple archaeological digs have unearthed details about the lives of Jefferson, subsequent owners and their families—and the slaves who worked on the plantation and their descendants.
—Richmond Times-Dispatch

Cutting edge. . . . Produce[s] a much clearer picture of what life at an important Virginia plantation was like in the early years of the republic.
—American Archaeology

In Beneath the Ivory Tower: The Archaeology of Academia, editors Russell K. Skowronek and Kenneth E. Lewis bring together essays revealing the ways archaeology can offer a more objective view of changes and transformations that have taken place on America’s college campuses.

With startling new evidence to make the connections explicitly clear—including letters, notes, drafts of speeches, and an unpublished poem—author W. Jason Miller shows how Hughes’s revolutionary poetry became an important part of Martin Luther King Jr.’s voice. During his extensive research for Origins of the Dream: Hughes’s Poetry and King’s Rhetoric, Miller even discovered a long-forgotten reel-to-reel tape of King’s first “I Have a Dream” speech, which was delivered in a high school gymnasium in Rocky Mount, North Carolina.

Majestic. Grounded in astute interpretations of how speech acts function in history, this book is an exemplary model for future inquiries about the confluence of thought, poetry, and social action.”
—Jerry Ward Jr., coeditor of The Cambridge History of African American Literature

A vade mecum for those interested in the cultural ingredients, the political values, and the artistic sensibilities that united Langston Hughes and Martin Luther King Jr. in spirit, thought, and outlook. Masterfully conceived, meticulously researched, and gracefully written, this book breaks new ground.
—Lewis V. Baldwin, author of There Is a Balm in Gilead: The Cultural Roots of Martin Luther King, Jr. 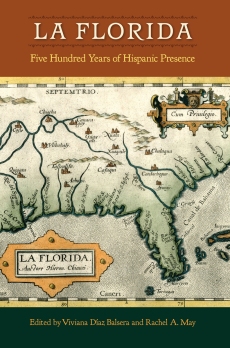 A thoughtful and informative multidisciplinary volume marked by an unusually elevated level of chapters that documents the nature and significance of the Hispanic presence in Florida from the early 16th century to the present. . . . Essential.
—Choice

Travels five centuries—using the lenses of art, architecture, literature, archaeology, politics, and at least a half-dozen other disciplines to trace the Hispanic presence in Florida that began in 1513 with Spaniard Ponce de León.
—Forum

In Black Power in Dixie: A Political History of African Americans in Atlanta, author Alton Hornsby provides an analysis of how one of the most important southern cities managed, adapted, and coped with the struggle for racial justice.

Succeeds masterfully in synthesizing a vast array of secondary and primary sources into a highly readable account of black politics in Atlanta.
—American Historical Review

[A] richly detailed account of the problems and successes of Atlanta’s African American leaders.
—Choice

Beginning with Batista’s coup in 1952, which catalyzed the rebels, and concluding with present-day transformations initiated under Raúl Castro, Revolutionary Cuba: A History by Luis Martínez-Fernández provides a balanced analytical synthesis of all the major topics of contemporary Cuban history.

One of the first books in nearly three decades that dares to explore the Cuban Revolution from its origins through Raul Castro’s government.
—NBC Miami

Helpful to anyone trying to understand present-day Cuba.
—CubaNews

Provides a strong narrative and, as the reconciliation and economic integration of Cuba and the Cuban diaspora accelerates following the post-December 2014 normalization of US–Cuban relations, an increasingly significant perspective.
—Social History

From the black pirates of Biscayne Bay to the election of U.S. Rep. Carrie Meek, from the birth of “Colored Town” to the Miami civil rights movement and beyond, Black Miami in the Twentieth Century by Marvin Dunn traces the history of African Americans in south Florida and their pivotal role in the growth and development of Miami during the first 100 years of the city’s history.

Dunn gives us the first comprehensive look at what the path has been like for the individuals, businesses, churches, civic groups and fraternal societies that cast their lot with this young community and how, even in the worst of times, they have held on.
—Miami Herald