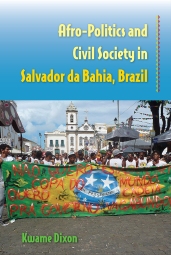 “Powerfully illustrates that Bahia has a vibrant black political history worthy of documentation, re-centering the scholarship on race and politics to the northeast where the black population is the majority.”—Keisha-Khan Y. Perry, author of Black Women against the Land Grab: The Fight for Racial Justice in Brazil
.

“English-language work has rarely paid such attention to discourses in Afro-Brazilian communities on civil society inclusion and the process of democratization. This book is a significant contribution to understanding that movement for change and social justice.”—Clarence Lusane, author of The Black History of the White House

Brazil’s black population, one of the oldest and largest in the Americas, mobilized a vibrant antiracism movement from grassroots origins when the country transitioned from dictatorship to democracy in the 1980s. Campaigning for political equality after centuries of deeply engrained racial hierarchies, African-descended groups have been working to unlock democratic spaces that were previously closed to them.
.
Using the city of Salvador as a case study, Kwame Dixon tracks the emergence of black civil society groups and their political projects: claiming new citizenship rights, testing new anti-discrimination and affirmative action measures, reclaiming rural and urban land, and increasing political representation. This book is one of the first to explore how Afro-Brazilians have influenced politics and democratic institutions in the contemporary period.

.
Kwame Dixon is assistant professor of African American studies at Syracuse University. He is coeditor of Comparative Perspectives on Afro-Latin America.