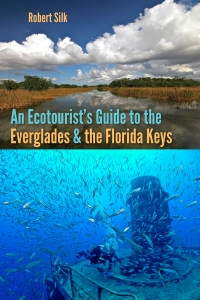 Picking up a copy of Robert Silk’s An Ecotourist’s Guide to the Everglades and the Florida Keys was like hopping into my dad’s old Tahoe and cruising down the Florida coast. Ever since my father was old enough, he was taking trips from the cold Jersey shore to the warm shores of the Florida Keys. Once my mother was in the picture, she started to go with him. A few decades, two kids, and a move to Florida later, my parents still frequent Key West every summer they can, claiming that it’s just the break they need from the hustle and bustle of daily work and family life.

What does it mean to be an ecotourist? Ecotourism is all about experiencing natural environments and getting up close with wildlife. Ecotourists also try to turn off their motors and power up their muscles to travel in eco-friendly ways.

For outdoor lovers, the Everglades and the Florida Keys form a natural itinerary. After all, within the space of a single day one can hike, paddle, or cruise though the world’s most famous wetland, then dive or snorkel on North America’s only living barrier reef.

A particularly striking part of Silk’s ecotourism guide is his chapter on Key West and the Dry Tortugas National Park. Silk does a great job selecting the perfect spots to visit to fully experience the beautiful environment in these places.

This past summer I was lucky enough to visit Dry Tortugas and Fort Jefferson, which was truly a unique experience. Dry Tortugas is one of the least visited national parks in the United States because it is a group of islands, inaccessible by car. I think Silk describes it nicely:

Whether you travel the 70 miles [off the coast of Key West] via ferry, seaplane, or private vessel, you’ll know the effort has been worth it when Fort Jefferson appears on the horizon, its stout, brick walls framed majestically against the remote blue sea.

My family and I traveled via seaplane, which is the quickest option. When we landed, a ferry boat full of people was just departing, leaving the whole island for us to explore. The huge Civil War-era fortress isn’t hard to miss and neither is the abundant wildlife soaring in the sky and swimming in the aquatic depths.

The Dry Tortugas is also home to the southernmost edge of the 220-mile-long Florida Keys reef tract, has seven small islands, and plays host to nesting bird colonies seen nowhere else in North America.

We kicked off our island adventure with a tour of the fort, exploring the brick tunnels and lighthouse. Fort Jefferson used to be a prison and is most famous for jailing Dr. Samuel Mudd, the doctor who repaired John Wilkes Booth’s broken leg after Booth assassinated President Lincoln. Mudd was shipped off to Fort Jefferson where he spent most of his time in a dungeon—until yellow fever broke out on the island. The prison doctor fell victim to the epidemic and Mudd took over his post. Mudd saved a lot of lives and was eventually pardoned.

After we got our fill of the fort, my family and I hit the beach to snorkel and explore the outskirts of the island. Silk’s book comes in handy here:

You’ll get an excellent taste of the marine life the Dry Tortugas has to offer merely by snorkeling off the Garden Key beach. If the water is calm, snorkel out to the remains of the coaling Fort Jefferson. . . . By permission of Garl Harrold, dock on the south side of the island for a chance to see parrot fish, angelfish, snook, tarpon, and even reef sharks.

Even though my mom accidentally took her phone for a swim, we had a great time seeing all kinds of fish and corals including a sea turtle and a stingray. Along the beach were people with tents and camping supplies. While Dry Tortugas is dry, meaning there is no fresh water on the island, many people will bring their own supplies, set up camp, and spend a night or two under the stars. There is a lot to do on the island if you bring the right equipment—if you travel by boat you can even take along your kayak—and time seemed to fly by during our day under the Dry Tortugas sun.

We headed back via seaplane once more. I cannot recommend traveling sea plane enough! Our pilot, tanned and barefoot, blasted Sublime and Jimmy Buffet the whole ride back. We saw sharks, turtles, and other wildlife in the waters, and we also passed over a few shipwrecks. If I had been headed back to anywhere but Key West I would have been disappointed to leave, but Key West is an ecotourist’s paradise in and of itself.

An ecotourist can’t go wrong visiting the Florida Keys and Key West is the perfect final stop. The glistening ocean urges you to dive in and the streets are lush and green. Once you get past the crowded and commercial Duval Street (which is an absolute party), you’ll find beautiful streets with flourishing gardens and museums to tour, layered with a rich history that is astoundingly evident with every step you take. I recommend visiting the Curry Mansion and climbing up to the attic and looking out for a rooftop view, or tramping through the odd and endless Key West Cemetery. 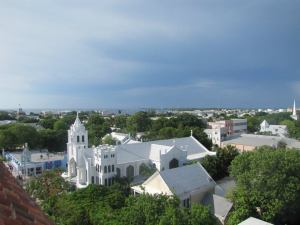 Wondering how to get around? Silk recommends a bike rental.

“Cruise through the interesting Old Town neighborhoods east of Duval Street. After that, bicycle around the Truman Annex just southwest of Mallory Square, then take the short ride through Fort Zachary Taylor Historic State Park, where you can gaze on the shipping channel and the moat surrounding the fort.”

The Truman Annex is a historic neighborhood and former naval station. President Harry Truman used to spend his winters in a pretty white house located within the community. The quiet and colorful neighborhood, close to the state park and city streets, is a great place to stay for someone looking to get their fill of everything Key West has to offer.

One of my lasting memories of the Florida Keys is a Danger Charters cruise I took in Key West. Silk recommends paddling, snorkeling, and diving when you’re in the Keys, and a half-day guided excursion is the perfect way to fit it all in. We set off in the afternoon and enjoyed a day of sailing, snorkeling, and kayaking through mangrove islands. As we sailed back to the coast, the day came to an end and we watched the sunset on the water. I’ll never forget the wind in my hair, the sun glittering on the ocean, and the pleasant ache in my muscles from a day spent outdoors.

So pick up a copy of Robert Silk’s An Ecotourist’s Guide to the Everglades and the Florida Keys. I can attest that Silk gives spot-on advice and recommendations for outdoor fun. The natural environment is beautiful and unique at the southernmost point of the United States, and you won’t want to stop exploring. This book will guide you to have your own Florida Keys adventure—the ecotourist way.

2 thoughts on “Exploring Key West and the Dry Tortugas”