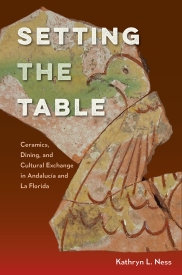 “A long-needed comparison between Spanish and Spanish colonial sites, showing how both inform us about Spanish identity at home and abroad.”—Charles R. Ewen, coeditor of Pieces of Eight: More Archaeology of Piracy

“The first systematic attempt to consider the eighteenth-century archaeological record in Spain and measure it against the decades-long research in St. Augustine. It is long overdue and valuable.”—Russell K. Skowronek, coauthor of Ceramic Production in Early Hispanic California: Craft, Economy, and Trade on the Frontier of New Spain

Examining ceramics from eighteenth-century household sites in Jerez de la Frontera, Spain, and St. Augustine, Florida, Setting the Table opens up new interpretations of cultural exchange, change, and identity in the early modern Spanish empire. This trans-Atlantic perspective sheds light on the largely underrepresented connections between the Spanish Empire and its Atlantic territories, as well as the ways that Spanish and Spanish American culture came together to create something new and distinct.

To analyze and compare tableware from these far-removed locations, Kathryn Ness proposes and employs a new vessel-based classification system to bridge the differences between existing systems. Her findings show that on both sides of the Atlantic, similar major changes to dining practices and foodways developed at almost the same time. Ness argues that the people of Spain and the Spanish Americas influenced each other, reinterpreting and incorporating new ideas that reflected traditional Spanish culture, while also assimilating French fashions, like matching ceramics, and British items, such as tea. They were creating and expressing a distinct Spanish Atlantic identity that retained some traditions from the home country while welcoming new ideas from an increasingly global network.

Kathryn L. Ness is curator of collections at Plimoth Plantation in Plymouth, Massachusetts.