Music Brings Us Together: An Inside Look at Gainesville Rock History

Written by Ale Gasso, metadata manager and sales assistant at the University Press of Florida

It was a typical Friday night in downtown Gainesville as I slowly sipped a beer at one of my favorite local spots—Loosey’s Pub. A nice crowd gathered to catch some live music and as I worked at the plugging and unraveling of cords, I scanned the crowd from the stage. I was happy to see that many of my UPF colleagues had made it to the venue to show their support for my “weekend hobby”—playing rhythm guitar in a heavy metal doom band called Thunderclap.

Around them were other familiar faces of bartenders, business owners, artists and musicians, writers, DJs and radio hosts, filmographers, promoters, and everyone who has regularly supported the music scene I’m so proud to be a part of in whatever way they can, their silhouetted faces patiently aimed toward the stage as we set up and sound-checked.

The scene brought me back to a book signing I’d attended a few months prior at the Matheson History Museum for Marty Jourard’s Music Everywhere. A lot of the same faces were there—movers and shakers from Gainesville’s music scene gathered in that old room to hear stories of the city’s musical roots. There were so many overlapping generations of music lovers, musicians, venue owners, promoters, journalists, and documentarians, that to pull back the layers would have revealed the still-beating heart of this musical city. And somehow Marty had gathered them all into a single room—a room, where it was noted, the Allman Brothers had once played.

From the back of the room I listened to Marty’s stories of a time long gone but still holding strong as the bones of this still-thriving beast of a music scene. It was almost like being at a high school reunion, the way the crowd eagerly shared stories of their collective musical past. In front of me sat musicians I’d shared the stage with only a week prior and the promoter who’d booked the show my band would be playing the next day. Next to them sat those who were mentioned in the book, the fans who were at the shows, and the people who made it all happen in the earliest days of Gainesville’s music scene. Marty showed us how the road had been paved and the room was filled with those who have undertaken the task of maintaining it. As a member of a local three-piece, and having been a part of the Gainesville music scene since the early ‘90s, the moment hit me with a special kind of nostalgia. The music was the reason I relocated from Miami over fifteen years ago and here were gathered those who fostered what is now a major part of my life.

For the release of this book, I saw the coming together of many generations who have been working for decades under the radar, for little or no compensation, only to support a love for homegrown music. These people came together, maybe not knowing one another, not knowing the person next to them also spent a great deal of their time dedicated to the same cause, and they were all there to pay tribute to Marty—for taking the near-impossible step of recording those memories for posterity.

Now here I was, a few months later, about to play to many of the same people who’d gathered that day for a reading of our musical past, who were once again coming together to support the scene we all love. As earplugs were shoved into place and the feedback began its squealing assault on the crowd, I had flashbacks of many decades spent watching other bands play that same stage, in a room that has its own batch of stories to tell.  The moment reminded me that Gainesville is a special place with a unique history and a strong, supportive community.  It seemed like it all had come full circle and I truly felt like part of this important piece of musical history. 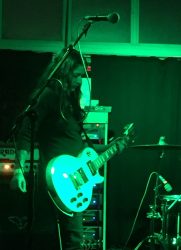 Ale Gasso, lyricist and rhythm guitarist for the Gainesville-based metal band Thunderclap, first became a part of the band when they began using her poems as lyrics to songs. She has been involved in Gainesville’s music scene for over twenty years and has lived in Gainesville since 2001. She is metadata manager and sales assistant at the University Press of Florida, and if you haven’t read it yet she recommends picking up a copy of Music Everywhere: The Rock and Roll Roots of a Southern Town by Marty Jourard.