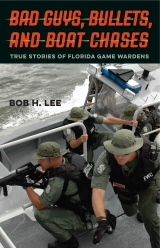 “Engaging, humorous, and touching. As we meet this crazy real-life cast, Lee shows us that the true character of those on the frontlines of the fight against wildlife crime is integrity and a commitment to protect animals and landscapes.”—Laurel A. Neme, author of Animal Investigators: How the World’s First Wildlife Forensics Lab is Solving Crimes and Saving Endangered Species

“The job of a wildlife officer is never boring. Lee takes you behind the scenes on patrol—using everything from airboats to airplanes—as he and other state wildlife officers track and apprehend poachers in the Sunshine State.”—W. H. “Chip” Gross, coauthor of Poachers Were My Prey: Eighteen Years as an Undercover Wildlife Officer

“Lee’s enlightening and entertaining stories will open your eyes to the duties and responsibilities that these officers perform on any given day.”—Dave Grant, past president, North American Game Warden Museum

“Lee provides remarkable insight into a world and culture unknown to most people, revealing the true diversity and dangers of the Game Warden profession.”—Craig Hunter, director of law enforcement, Texas Parks and Wildlife

“These stories convey the feel of the Florida environment, the tedium of the hiding and waiting, the thrill of the chase and capture, and the exhaustion, exhilaration, or heartbreak of the search and rescue. You won’t be disappointed.”—James “Tom” Mastin, consulting forester and principal, Natural Resource Planning Services, Inc.

Imagine yourself alone in the wilderness holding two lawbreaking suspects at gunpoint. No onlookers, no backup. Just you in the dark, in the middle of nowhere, with suspects who would cheerfully kill you if they thought they could get away with it.

Veteran wildlife officer Bob Lee takes readers deep into the days and nights of Florida game wardens in Bad Guys, Bullets, and Boat Chases. Some people might think that all these officers do is check fishing licenses, but this book tells a very different story, one of shoot-outs, survival, rescue, and powerboat chases. Tracking black-market gator poachers, jumping through truck windows, shredding boat propellers on underwater logs, trapping airboats in wild hog muck, ferrying crates of baby sea turtles, hunting for missing persons in remote areas, getting stuck under a 500-pound all-terrain vehicle at the bottom of a sinkhole—these are just some of the situations game wardens find themselves in.

And beyond the action and excitement, the highs and lows of a wildlife officer’s job would test the mental limits of even the bravest adventurer. In these stories, a rookie game warden works to rescue survivors after a jumbo jet crashes in a swamp; an experienced trapper leads a challenging search for a rogue gator after a tragic attack; and a dedicated lieutenant helps a deer poacher turn his life around.

From Live Oak to the Everglades, from the cattle ranches west of Lake Okeechobee to the inshore fishing grounds of Pine Island, these amazing experiences span the state. Discover the excitement, dangers, and disasters that game wardens face every day on the job.

Bob H. Lee spent over three decades as a water patrol officer on the St. Johns River and as a land patrol lieutenant in Putnam, St. Johns, and Flagler counties. He is the author of Backcountry Lawman: True Stories from a Florida Game Warden.

Read our exclusive interview with author Bob H. Lee as he discusses his experience as a game warden:

What inspired you to become a game warden?

Since my early teens, I never saw myself as the type of person who would be happy working in a climate-controlled office building. Not for me. I had a thirst for adventure and a need for freedom. I wanted to know what was on the other side of that fence line, around the next bend in the creek ahead, or beyond a turn in a woods trail. Perhaps it was because of my love for fishing and hunting and having had the wonderful opportunity of being raised on a secluded lake in Lutz (north of Tampa) that I came to appreciate the possibilities of making a living in Florida’s backcountry. The choice was easy for me: law enforcement + wilderness = game warden. Best decision I ever made, other than marrying Karen, my lovely bride of 42 years.

What was your most rewarding experience as a game warden?

The high stakes game of catch-me-if you-can is what motivated me to get up at ridiculous hours in the morning or to stay out all night chasing poachers. To be successful at this job you need to be as cunning as your adversaries and have the all-out will to win. Some folks mistakenly think this job is about catching and releasing wildlife. Wrong. It’s about keeping tabs on the people who harvest wildlife. That’s how we keep game and fish populations from being depleted.

What do you think is the most dangerous environment to patrol in Florida?

If this were the 1970s, I could cite several counties where the job of a game warden would be reminiscent of a lone ranger in the Wild West. But times have changed. I would have to say danger can happen anywhere, and at any time you’re dealing with folks who can turn ornery. The last gunfight occurred a little over a year ago, in the panhandle. It began with a call of a disturbance on a sailboat. Unbeknownst to the officer, one of the two men on board had an outstanding warrant for his arrest. When asked for his identification, he whipped out a Glock pistol and opened fire. The officer jumped into the water, taking cover behind the hull of his patrol boat. He was shot twice—once in the ballistic vest and once through the collarbone. But the officer returned fire while treading water, hitting one suspect in the hand. During a press conference the sheriff said the officer’s survival was a “miracle.” What it really comes down to is “luck of the draw.” And I mean that in the figurative and literal sense.

Why go to such much effort to arrest someone for what is likely to be a misdemeanor or a low-grade felony?

In the United States, there are roughly 900,000 to 1,000,000 sworn city, sheriff, state, and federal law enforcement officers. Their primary job is to quell conventional crime. In comparison, there are only about 6,000 sworn conservation law enforcement officers in the entire US. We are, literally, the last line of defense in the protection of environmental resources and the people who venture into them. In my opinion, nothing short of a hundred percent commitment is satisfactory.

How has the game warden profession evolved over the years?

Better training, better equipment (especially handheld radios that actually work), administrative rules of engagement, such as fleeing, attempting to elude, and driving black (no lights). I also have fond memories of the first time I ever used a cell phone on the job. It was great! I could finally talk with a complainant while driving to a wildlife crime scene rather than go through the arduous process of relaying my questions through dispatch. And now, in 2016, we have officers who monitor Facebook for game violators. When the bad guys post a picture of themselves along with an illegal deer or turkey or alligator, well, it’s a lot like shooting ducks in that proverbial bathtub.

Your book retells a variety of wardens’ adventures from as far back as 1972. How did you choose which stories to include?

I put on my journalism cap and spent three years interviewing both active and retired officers from one end of peninsular Florida to the other. I’d heard about some of the stories over the years and tracked the officers down. Others I stumbled into. Gray Leonhard is the star in Chapter 1. I originally went to his home to interview him for a sea turtle egg story. First question out of my mouth was, “What interesting search and rescues have you worked?” He tells me he saw Flight 401 crash in the Everglades and later worked survivor and body recovery for the next three days. I set the egg story aside and focused on what would become, after 3 months of work, one of the biggest stories in the book. As a writer, you should be flexible and willing to gravitate to the best story.

What do you want readers who may initially be unfamiliar with the game warden profession to take away from the book?

We often patrol alone and in remote areas, wholly dependent on our own judgment should we get in a bind. Bottom line—whatever you get yourself into, you darn well better be prepared to get yourself out, because chances are no one will be around to help.

What advice do you have for any future game wardens?

Don’t get arrested, stay in shape, take public speaking courses, take writing courses (being a woods cop involves a lot of writing). A college education, while not mandatory, certainly helps. We also hire a lot of folks who have prior military experience. It seems to season them—gets them used to stumbling around in the dark. Plan to have some real-life work experience before you apply. The minimum age for employment is 19. But the reality is the Florida Fish and Wildlife Conservation Commission will not hire you without real-life experience. For those who are interested in employment, please go to http://myfwc.com.

What is the most important quality someone must possess to become a successful game warden?

If you could say one thing to all the “bad guys” out there, what would it be?

Just because you don’t see or hear anyone doesn’t mean you’re alone. We can be sneaky, too.