The History of Human Space Flight 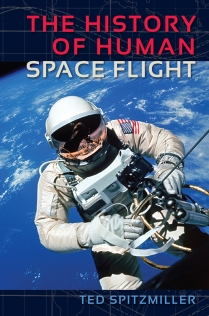 “An ambitious and thorough history, extending back to the earliest risk takers and innovators who laid the groundwork for the astronauts and cosmonauts who would break the bonds of Earth.”—George Leopold, author of Calculated Risk

“Brings many of the personalities in the exploration of space to life. Spitzmiller offers a great perspective on issues from Von Braun’s involvement with the Nazi Party to Grissom’s infamous hatch.”—Sidney M. Gutierrez, former NASA shuttle commander

“A well-researched space history full of little-known details that all space enthusiasts will want.”—Marianne J. Dyson, author of A Passion for Space

Highlighting men and women across the globe who have dedicated themselves to pushing the limits of space exploration, The History of Human Space Flight surveys the programs, technological advancements, medical equipment, and automated systems that have made space travel possible.

Beginning with the invention of balloons that lifted early explorers into the stratosphere, Ted Spitzmiller describes how humans first came to employ lifting gasses such as hydrogen and helium. He traces the influence of science fiction writers on the development of rocket science, looks at the role of rocket societies in the early twentieth century, and discusses the use of rockets in World War II warfare.

Spitzmiller considers the engineering and space medicine advances that finally enabled humans to fly beyond the earth’s atmosphere during the space race between the United States and the Soviet Union. He recreates the excitement felt around the world as Yuri Gagarin and John Glenn completed their first orbital flights. He recounts triumphs and tragedies, such as Neil Armstrong’s “one small step” and the Challenger and Columbia disasters.

The story continues with the development of the International Space Station, NASA’s interest in asteroids and Mars, and the emergence of China as a major player in the space arena. Spitzmiller shows the impact of space flight on human history and speculates on the future of exploration beyond our current understandings of physics and the known boundaries of time and space.

Ted Spitzmiller, retired from the Los Alamos National Laboratory, is a pilot and flight instructor. He is the author of many books, including the two-volume work Astronautics.

Read our exclusive interview with author Ted Spitzmiller as he talks about astronauts, space travel, and missions to Mars:

What sparked your fascination with humans’ relationship with space?

I have always been fascinated with aviation and space since birth. With the launch of Sputnik in 1957 my interest deepened, and I have enjoyed closely following the milestones that have marked mankind’s advances.

Why did you consider the early balloonists and rocket plane pilots as a part of “space” history?

They faced the same unknowns as the modern-day astronaut and didn’t allow the perils they confronted to deter them.

What about the future of space travel excites you most?

The prospect of humans venturing to Mars and settling it, at least as a scientific outpost, if not as a long-term enclave for humanity.

Why should the average person take interest in space travel?

Few realize how much of our daily commerce in communications, weather, and entertainment uses space as a medium (as well as military reconnaissance). The human presence allows us to explore the vantage point of a micro-gravity environment, without the hindrance of an atmosphere, to conduct a wide variety of scientific and commercial pursuits.

Why is it so important for organizations to continue pushing boundaries when it comes to space travel?

As with virtually every human endeavor, it is only by pushing the boundaries that we can understand more about our environment and ourselves.

What was your favorite piece of history to write about in your book?

That’s a tough question, because I really enjoyed virtually every aspect. Perhaps the period from Sputnik I (1957) to the first human space flights of Gagarin and Shepard (1961), because I was an impressionable teenager during that period, and reflecting on those events brought back the excitement that I felt.

What is the day-to-day routine an astronaut undergoes to prepare for space?

When assigned to a specific mission, the astronaut works closely with the mission planners to understand the role they will play and the objectives sought. Of course, maintaining a special diet and exercise is important, as well as being exposed to some of the rigors of the launch environment, such as G-forces and weightlessness. Because there is a wide variety of specialists now involved in the ISS (our only current operational human program), training for the specifics tasks to be performed varies extensively.

If you had to choose a profession related to space travel, which job would you choose?

Of course, being the command pilot of a winged spacecraft, such as the space shuttle, would be ideal. But in today’s automated and wingless spacecraft, there is little need for piloting skills. Rocket engine design would be an exciting second choice for the ground-bound engineer.

If people understood that so much of rocket science is not beyond their grasp, they might find their own endeavors to be just as exciting and challenging. Perhaps, “pretend it’s rocket science.”

What do you hope readers will enjoy the most about your book?

I can only hope that I have conveyed the excitement of the various periods and the extent of the personal effort and commitment that went into each event described, as well as the personal gratification of achievement that these pioneers savored.