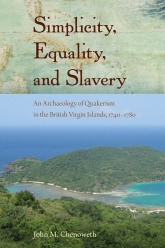 We are proud to announce the latest book in the Florida Museum of Natural History’s Ripley P. Bullen Series, published by the University of Florida Press.

“A significant empirical contribution to the transdisciplinary study of eighteenth-century Atlantic history and the colonial history of the Christian Church.”—Dan Hicks, author of The Garden of the World: An Historical Archaeology of Sugar Landscapes in the Eastern Caribbean

“Thoughtfully applies practice theory to the concept of Quakerism as a religion, while simultaneously examining how Quaker practices shaped the lives not only of practitioners but of those they enslaved.”—James A. Delle, author of The Colonial Caribbean: Landscapes of Power in the Plantation System

“A nuanced look at Quakerism and its relationship with slavery.”—Patricia M. Samford, author of Subfloor Pits and the Archaeology of Slavery in Colonial Virginia

Inspired by the Quaker ideals of simplicity, equality, and peace, a group of white planters formed a community in the British Virgin Islands during the eighteenth century. Yet they lived in a slave society, and nearly all their members held enslaved people. In this book, John Chenoweth examines how the community navigated the contradictions of Quakerism and plantation ownership.

Using archaeological and archival information, Simplicity, Equality, and Slavery reveals how a web of connections led to the community’s establishment, how Quaker religious practices intersected with other aspects of daily life in the Caribbean, and how these practices were altered to fit a slavery-based economy and society. He also examines how dissent and schism eventually brought about the end of the community after just one generation. This is a fascinating study of the ways religious ideals can be interpreted in everyday practice to adapt to different local contexts.

John M. Chenoweth is assistant professor of anthropology at the University of Michigan–Dearborn.

A volume in the Florida Museum of Natural History: Ripley P. Bullen Series 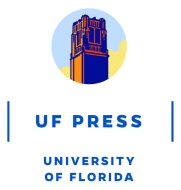 New in #archaeology, METHODS, MOUNDS, AND MISSIONS builds on the work of @floridamuseum’s influential archaeologist Jerald T. Milanich to ask big new questions about #Florida’s past.
Loading Comments...
%d bloggers like this: