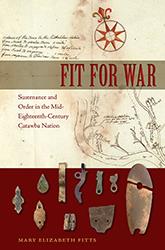 “Fitts combines archaeology and ethnohistory to explore Catawba strategies for retaining sovereignty and power in the colonial era. A model of interdisciplinary methodology, this book offers new insights into coalescence, colonialism, and Indigenous persistence.”—Christina Snyder, author of Slavery in Indian Country: The Changing Face of Captivity in Early America

“A fascinating glimpse of the Catawba Nation during this critical period. Fitts succeeds in tracing the mechanics of individual decisions that laid the groundwork for collective change.”—William L. Ramsey, author of The Yamasee War: A Study of Culture, Economy, and Conflict in the Colonial South

The Catawba Nation played an important role in the early colonial Southeast, serving as a military ally of the British and a haven for refugees from other native groups, yet it has largely been overlooked by scholars and the public. Fit for War explains how the Nation maintained its sovereignty while continuing to reside in its precolonial homeland near present-day Charlotte, North Carolina.

Drawing from colonial archives and new archaeological data, Mary Elizabeth Fitts shows that militarization helped the Catawba maintain political autonomy but forced them to consolidate their settlements and—with settler encroachment and a regional drought—led to a food crisis. Focusing on craft and foodways, Fitts uncovers how Catawba women worked to feed the Nation, a story missing from colonial records. Her research highlights the double-edged nature of tactics available to American Indian groups seeking to keep their independence in the face of colonization.

A volume in the Florida Museum of Natural History: Ripley P. Bullen Series