An Author’s Response to Charlottesville

I was honored that I could add my voice to something that is not only a national conversation, but an international one.”

In the wake of events in Charlottesville last weekend, University Press of Florida author and University of North Carolina at Charlotte history professor Karen Cox was called upon as an expert to comment on the meaning behind Confederate monuments and whether they should be removed.

Her op-eds appeared in the New York Times and the Washington Post last week.

In her op-ed for the New York Times, Cox presented a case for the removal of Confederate monuments.

The Charlottesville march, with its hundreds of neo-Nazis and white nationalists coming out to defend the memory of General Lee, puts the lie to the notion that, as the apologists say, these monuments are about ‘heritage, not hate.'” (Read more.)

In the Washington Post, she argues that the point of Confederate monuments is to celebrate white supremacy.

Almost none of the monuments were put up right after the Civil War. Some were erected during the civil rights era of the early 1960s, which coincided with the war’s centennial, but the vast majority of monuments date to between 1895 and World War I. They were part of a campaign to paint the Southern cause in the Civil War as just and slavery as a benevolent institution, and their installation came against a backdrop of Jim Crow violence and oppression of African Americans.” (Read more.)

After her op-eds went live, Cox received responses that prompted her to write about how it felt to have the opportunity to offer her expertise on a topic she has studied for over two decades.

“I finally got the opportunity to say something about a subject that has long been assumed to be the purview of male historians,” she says in her blog. “What I wrote about Confederate monuments cannot be equated with how black southerners must feel in seeing these tangible reminders of their treatment at the hands of people who did not, and still do not, care about their humanity.” 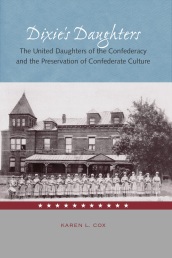 Karen L. Cox is professor of history at the University of North Carolina at Charlotte and the author of various books, including Dixie’s Daughters: The United Daughters of the Confederacy and the Preservation of Confederate Culture.