The University Press of Florida is proud to have Jason De León, contributor to Migration and Disruptions, among the 2017 MacArthur “Genius” Grant winners.

De León is an anthropologist at the University of Michigan studying undocumented migrants coming to the United States from Latin America. “We see this grant as a way to facilitate the work that we’re doing even more and to push it in new directions,” De León told NPR shortly after the announcement. Relying on an approach that combines forensic science, personal accounts, and archaeological research, De León hopes to tell migrants’ stories by studying the items they leave behind as they cross the border.

Here is the MacArthur Foundation’s spotlight on De León:

De León’s chapter in Migration and Disruptions focuses on how the objects abandoned by migrants—including water bottles, first-aid supplies, food cans, clothes and blankets—impact the natural environment. He argues that their effect, as well as the attention paid to the so-called “trash,” is exaggerated and ignores a more significant consequence—the toll the traumatic journey takes on these individuals.

The John D. and Catherine T. MacArthur Fellowship award is given to those who are experts and innovators in their fields, and who have “shown extraordinary originality and dedication in their creative pursuits and a marked capacity for self-direction.” UPF would like to formally congratulate De León and the 23 other winners of the MacArthur Fellowship. 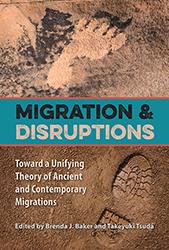 In honor of De León’s “Genius” Grant, we are offering a discount price on Migration and Disruptions through October 31. Order at upress.ufl.edu and use code GENIUS at checkout.

Read an excerpt from Jason De León’s chapter below.

Excerpt from
“‘Disruption,’ Use Wear, and Migrant Habitus in the Sonoran Desert”

Chapter from Migration and Disruptions: Toward a Unifying Theory of Ancient and Contemporary Migrations

Migrant Techniques and Use Wear

Traditional archaeological studies of use wear have tended to focus on understanding how the function of an object can be inferred from analyses of patterns of wear, with little emphasis on body techniques. Our approach seeks to show the intimate connection between people and objects and how this relationship can leave traces that, when analyzed, can open up new understandings of crossing techniques and migrant ways of being in the desert. Compared to most archaeological approaches, we define use wear more broadly to encompass both the modifications made to the physical structure of an artifact as well as objects that have been emptied of their contents and in essence “used up.”

We define wear patterns as modifications made to objects resulting from their employment in tasks or activities for which they were intentionally designed. Here we briefly describe wear patterns on two classes of artifacts: shoes and water bottles. Migrants who walk long distances commonly suffer from friction blisters (subdermal pockets of fluid caused by forceful rubbing) on their feet. These painful injuries are caused by poorly conditioned feet, ill-fitting shoes and socks, improper footwear, heat, and moisture, all of which are typical conditions for border crossers. People attempt to combat blisters by carrying foot powder, extra socks, and bandages. Despite these preventative measures, blisters are usually caused by poorly fitting or cheaply manufactured shoes, a person’s failure to recognize and adequately treat the early stages of a blister, unhygienic desert conditions that can lead to infection, and a general inability to rest one’s feet for any significant period of time. Many of the shoes recovered in the desert show signs of intense walking in the form of worn-out treads, shredded uppers, or soles with holes worn completely through. Holes are often created by the persistent rubbing of feet against the shoe bottom during long-distance hiking over rough terrain in shoddy footwear. This repeated motion typically leads to the formation of blisters. A 33-year-old migrant named Felipe comments on how unsuitable shoes can lead to other types of injuries: “Sometimes you can walk in the shade and it isn’t so bad. Inside the arroyos [washes], you can find shade. The risks in those places are the rocks. Some of these rocks are very sharp and you are going up and down the mountain climbing all over these rocks. . . . Up and down. Up and down. The mountains are all the same, and that is how the coyote takes you . . . People bring their walking shoes, but not shoes for mountain climbing! They end up climbing all over rocks. People in Converse [sneakers] try to mountain climb! They end up stepping on sharp rocks and getting stuck by cholla [cactus] in the feet and legs.” In this quotation, Felipe highlights both the activities that injure feet and the decisions that people must make in regard to hiking strategies. A person has to decide whether to hike on flat terrain, where you expose yourself more directly to the sun (and border patrol), or to walk in shaded arroyos, where the rocky ground can injure your ill-equipped feet.

The many water and beverage bottles found in the desert are another class of objects that show an interesting wear pattern. On a general level, these empty containers suggest that their previous owners consumed all of the liquid contents and thus had no more need for the receptacle. However, several related factors must be considered in the interpretation of these discarded items. First, many of them are small, ranging from 500 milliliters to 1.5 liters, and these sizes suggest that people were underprepared for long-distance hiking, especially in the summer, when average daily consumption of water can be upward of 6 liters (De León 2012:485). Second, finding these discarded bottles in areas nowhere near additional water sources or roads suggests that their owners were unable to conserve their supply and ran out in an inopportune place. A lack of water leads many to suffer from hyperthermia, as a 36-year-old migrant named Raúl describes: “I thought I was going to die out there . . . I couldn’t take it. My heart was pounding and I started to see things. I was delirious. I was hallucinating. I was looking at the trees, but I was seeing houses and cities all around me . . . I would stop and take a small drink of water, but five minutes later I would see things again . . . I only brought a gallon of water with me.” In this all-too-common scenario, Raúl must ration the water in his bottle. Most do not carry more than two gallons of water for each trip, and the practice of taking small drinks for conservation purposes is widespread. The following excerpt is from a conversation with a migrant named Enrique an hour before entering the desert: “I’ve lived in the U.S. for the last 14 years and was deported here [to Sonora] last week . . . I’m going to try and cross the desert tonight . . . I’m bringing one gallon of water. I know it is not enough, but water is really heavy. I can’t carry more than one gallon. Look at my bag [points to a small duffel bag] . . . I don’t want to drink too much water before I leave . . . I don’t want to get a cramp . . . I just take little sips of my bottle and hope that I find more water along the way if I run out.”

Raúl and Enrique describe a water consumption technique where one drinks to combat the effects of the sun, but the sips must be small to both prevent cramping and conserve a limited supply. Enrique has not attempted a border crossing in many years, but he is familiar with this technique and will attempt to reproduce it. Both men discuss packing only a one-gallon bottle, which suggests that they have little choice but to use this strategy if they want to succeed. Carrying an insufficient amount of water typically is linked to a person’s (1) physical inability to transport a heavy load (partially influenced by backpack size), (2) underestimation of what an adequate supply of water is, and/or (3) inability to purchase extra water. Both the many interviews conducted with migrants regarding dehydration-related injuries and the overwhelming number of small empty bottles found in the desert suggest that this practice of conservation is a difficult technique to maintain, especially during the summer months. Those who run out of water may replenish their supply at bacteria-laden tanks used for watering livestock if they are “lucky” enough to encounter one. The consumption of cattle tank water is visible archaeologically via recovered bottles refilled with green liquid. Many remarked that drinking this water causes illness and increased dehydration: “We crossed with another man who was 62 years old. He couldn’t handle it. He drank some water from a cattle tank that made him sick. Well, we all drank it, but he got an infection. The water had little animals swimming in it, but we were so thirsty . . . He started vomiting and had diarrhea, so we took him back into Mexico” (Andres, 43-year-old migrant).

The practice of water conservation, which forces people to deprive themselves even when they are thirsty, can be thought of as a strategy that both keeps the body minimally hydrated and prevents someone from having to drink from cattle tanks. Drinking techniques are thus simultaneously used to conserve liquid, combat hyperthermia, and avoid having to imbibe unclean water. Empty bottles and those found refilled with filthy water suggest a failure to practice this technique successfully. Given that people accumulate crossing knowledge after multiple attempts (Singer and Massey 1998), some may learn this drinking strategy after failing to ration fluids during previous crossings.

A great deal of anthropological attention has been paid to why people migrate and how immigrants impact receiving communities. Considerably less work has focused on the physical act of migration. The dearth of ethnographic research on this particular phenomenon is understandable given that many modern migrations are conducted clandestinely (often illegally), making direct observation both difficult and ethically questionable. Archaeologists have also tended to avoid studying the act of migrating, because these moments are ephemeral, rapid, and often poorly preserved in the material record . . . The tendency to view Latino migrants as a source of environmental disruption means that desert conservationists rarely think critically about the implications of characterizing the things people leave behind as garbage or the potential damage that is done to the archaeological record when migrant stations are “cleaned up.”

To view migrant material culture simplistically as disruptive trash is problematic given that it allows for the erasure of the historical evidence of the movement of millions of border crossers who run the geopolitical gauntlet known as the Sonoran Desert in order to enter the U.S. labor market. At the current rate of “cleanup,” there may soon be no archaeological record left to debate.

Migration and Disruptions is available at a special discount price through October 31, 2017. To order, visit our website and use code GENIUS at checkout.