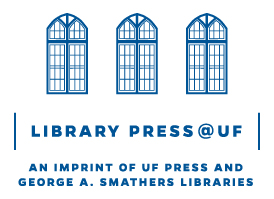 The LibraryPress@UF, an imprint of the University of Florida Press and the University of Florida George A. Smathers Libraries, is proud to announce the Florida and the Caribbean Open Books Series. This series makes available for free 39 classic out of print books on the region under an Open Access model. It is funded by the National Endowment for the Humanities and the Andrew W. Mellon Foundation as part of the Humanities Open Book Program.

Books in the series are available as digital PDFs at no cost at http://ufdc.ufl.edu/librarypress. Print copies of the books, as well as ePub formats for use with e-readers such as Kindle and Nook, are available for purchase.

With similarly aligned missions and roles that complement each other, the University of Florida Press and Libraries frequently collaborate to foster the creation, promotion, access, and preservation of research and creative works, in support of teaching, research and the public sphere. The LibraryPress@UF’s Open Books Series is one such collaboration.

The titles in the Open Books Series demonstrate the University Press of Florida’s long history of publishing Latin American and Caribbean studies scholarship that connects in and through Florida, a publishing legacy now amplified by the University of Florida Press and the LibraryPress@UF. Spanning time and place, the books highlight the various connections between the Sunshine State and its neighboring islands. Included are tales of early pioneers and Native Americans, travelogues and guidebooks, naturalist sketches of the area prior to the twentieth century and volumes on historic architecture.

Selected titles in the Florida and the Caribbean Open Books Series include The African American Heritage of Florida edited by David R. Colburn and Jane L. Landers, Florida Indians and the Invasion from Europe by Jerald T. Milanich, Historic Architecture in the Caribbean Islands by Edward E. Crain and Key West: The Old and the New by Jefferson B. Browne.

The first 21 titles in the series are now available:

Apalachee: The Land between the Rivers
John H. Hann

Caribbean Creolization: Reflections on the Cultural Dynamics of Language, Literature, and Identity
Edited by Kathleen M. Balutansky and Marie-Agnès Sourieau

The History and Antiquities of the City of St. Augustine, Florida
George R. Fairbanks

A History of Florida through New World Maps: Borders of Paradise
Edited by Dana Ste.Claire

Key West: The Old and the New
Jefferson B. Browne

A Narrative of the Early Days and Remembrances of Oceola Nikkanochee, Prince of Econchatti
Andrew G. Welch

A Relation, or Journal, of a Late Expedition, &c.
Edward Kimber

A Sketch of the History of Key West, Florida
Walter C. Maloney

Struggle for the Gulf Borderlands: The Creek War and the Battle of New Orleans, 1812–1815
Frank Lawrence Owsley Jr.

Tacachale: Essays on the Indians of Florida and Southeastern Georgia during the Historic Period
Edited by Jerald T. Milanich and Samuel Proctor

PDFs of books in the series are available for free. Want to order print copies? We are offering a limited-time discount on the print editions of the first 21 books. Order at upress.ufl.edu and use code LPUF at checkout. Offer ends December 31, 2017.