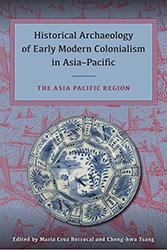 The Southwest Pacific and Oceanian Regions

“The essential source for scholarly reassessment of the Asia-Pacific region’s diverse and significant archaeology and history.”—James P. Delgado, coauthor of The Maritime Landscape of the Isthmus of Panamá

“Underpins a nuanced picture of Asia-Pacific that shows how the activities of the Chinese and Japanese in East Asia, the spread of Islam from South Asia, and the efforts of the Iberians and especially the Spanish from southern Europe ushered in a world of complex interaction and rapid and often profound change in local, regional, and wider cultural patterns.”—Ian Lilley, editor of Archaeology of Oceania: Australia and the Pacific Islands

The history of Asia-Pacific since the sixteenth century has traditionally been told with Europe as the main player ushering in a globalized, capitalist world, but the contributors to this volume and its companion volume suggest that Europeans merely appropriated existing systems in the area for their own benefit. The essays help decentralize that global history and assemble a picture of the region before and after European involvement in order to develop a more holistic understanding of colonial processes.

In the volume The Southwest Pacific and Oceanian Regions, case studies from Alofi, Vanuatu, the Marianas, Hawai‘i, Guam, and Taiwan compare the development of colonialism across different islands. Contributors discuss human settlement before the arrival of Dutch, French, British, and Spanish explorers, tracing major exchange routes that were active as early as the tenth century. Pulling from oral tradition as well as archaeological and written records, they highlight rarely examined sixteenth- and seventeenth-century encounters between indigenous populations and Europeans and draw attention to how cross-cultural interaction impacted the local peoples of Oceania.

The volume The Asia-Pacific Region looks at colonialism in the Philippines, China, Japan, and Vietnam, emphasizing the robust trans-regional networks that extended from Venice in the Mediterranean to Guangzhou in southern China before European contact. Southeast Asia had long been influenced by Buddhist, Hindu, and Muslim traders in ways that not only helped build the region’s ethnic and political divisions but continue to shape them in the present day. Essays show the complexity and significance of maritime trade during European colonization by investigating galleon wrecks in Manila full of goods from around the globe, Japan’s far-reaching porcelain exports, and the hundreds of Spanish coins discovered off China’s coast.

Packed with archaeological and historical evidence from both land and underwater sites, impressive in geographical scope, and featuring perspectives of scholars from many different countries and traditions, this volume and its companion illuminate the often misunderstood nature of early colonialism in Asia-Pacific.