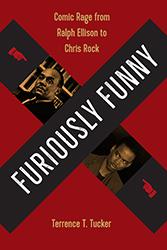 “An important and timely expansion of American racial discourse. Tucker’s demonstration of how the comic is not (just) funny and how rage is not (just) destructive is a welcome reminder that willful injustice merits irreverent scorn. “—Derek c. Maus, coeditor of Post-Soul Satire: Black Identity after Civil Rights

A combustible mix of fury and radicalism, pathos and pain, wit and love—Terrence Tucker calls it “comic rage,” and he shows how it has been used by African American artists to aggressively critique America’s racial divide.

In Furiously Funny: Comic Rage from Ralph Ellison to Chris Rock, Tucker finds that comic rage developed from black oral tradition and first shows up in literature by George Schuyler and Ralph Ellison shortly after World War II. He examines its role in novels and plays, following the growth of the expression into comics and stand-up comedy and film, where Richard Pryor, Spike Lee, Whoopi Goldberg, and Chris Rock have all used the technique.

Their work, Tucker argues, shares a comic vision that centralizes the African American experience and realigns racial discourse through an unequivocal frustration at white perceptions of blackness. They perpetuate images of black culture that run the risk of confirming stereotypes as a means to ridicule whites for allowing those destructive depictions to reinforce racist hierarchies. At the center of comic rage, then, is a full-throated embrace of African American folk life and cultural traditions that have emerged in defiance of white hegemony’s attempts to devalue, exploit, or distort those traditions. The simultaneous expression of comedy and militancy enables artists to reject the mainstream perspective by confronting white audiences with America’s legacy of racial oppression.

Tucker shows how this important art form continues to expand in new ways in the twenty-first century and how it acts as a form of resistance where audiences can engage in subjects that are otherwise taboo.

Terrence T. Tucker is associate professor of English at the University of Memphis.

"My advice to young dancers considering a career in ballet is to just do it. Just keep going, keep moving forwards, with courage and the knowledge that you have the power, ability, and strength of dance inside you."—@gavinalarsen, author of BEING A BALLERINA
Loading Comments...
Comment
×
%d bloggers like this: