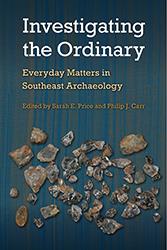 “Makes the case that the everyday should and does matter in archaeology. The content is fresh, the approaches are varied, and the case is convincing.”—Adam King, editor of Archaeology in South Carolina: Exploring the Hidden Heritage of the Palmetto State

Focusing on the daily concerns, activities, and routine events of people in the past, Investigating the Ordinary: Everyday Matters in Southeast Archaeology argues for a paradigm shift in the way southeastern archaeologists operate and urges them to think of the archaeological record in new ways. Instead of dividing archaeological work by time periods or artifact types, the essays in this volume unite separate areas of research through the theme of the everyday.

The contributors to this volume bring together case studies detailing ordinary people and their lives, spanning the Paleoindian period to the nineteenth century. The essays include an examination of how the white-tailed deer was entangled in the lives of Middle Archaic people not only as a food source but as a social and spiritual creature, as well as a look at the domestic lives of those who made exotic goods for the political and social elites in the Middle Woodland period. Cooking vessels in the Late Archaic period help trace the daily lives of the many people involved in their production, use, and eventual deposition. Mound sites are reconsidered in light of the everyday—assessing not only the meaning of the sites but the mobilization of labor and the deployment of resources that went into creating them.

Taken together, these essays demonstrate that attention to everyday life can help researchers avoid overemphasizing data and jargon and instead discover connections between the people of different eras. This approach will also inspire archaeologists with ways to humanize their research and engage the public with their work and with the deep history of the southeastern United States.

It's #NationalInternDay and we're highlighting three of our amazing #BookPublishing interns, all former or current students at @uflorida. Click the link in our bio to read guest posts from each person on our blog!
Loading Comments...
%d bloggers like this: