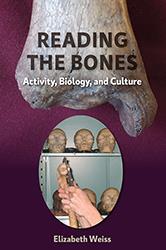 Written by Elizabeth Weiss, author of Reading the Bones: Activity, Biology, and Culture.

I love bones. My appreciation of the beauty of skeletal anatomy started at a very young age. As a child, my favorite toys were anatomical models that I had to build up like a 3-dimensional puzzle. One involved putting together an enlarged plastic eye in its socket. Later on, my study of anatomy taught me the form and function of the skeleton, allowed me to grasp the evolutionary links between humans and other animals, and provided a key to reconstructing the past lives of people who lived in times before writing could capture their humanity. I learned something that the models could not teach me—the incredible variation in skeletal anatomy that parallels the variation we see in the external appearance of humans every day and take for granted.

Anthropologists have been key players in helping people understand and accept human diversity. They even played roles in the enactment of civil rights laws. Andrew Goodman, one of three activists killed in Mississippi in the Freedom Summer murders of 1964, was an anthropologist who studied at Queens College in New York. Franz Boas, the “Father of American Anthropology” and one-time president of the American Academy for the Advancement of Science, was a proponent of equal treatment across races; although he died in 1942, his students were key in contributing to the National Association for the Advancement of Colored People (NAACP). And Boasian anthropology has been used to teach students that variation in human appearance is changeable and normal.

Anthropologists have played an important role in explaining easily visible differences such as skin color and height in terms of adaptations to different environmental pressures. They have been at the forefront of demonstrating that the vast diversity seen in humans is the result of very minor differences in genes. We are all far more similar than we are different, and the differences are superficial. Through these efforts, along with general education classes in anthropology, upper-division courses on human variation in anthropology, and many more educational efforts, anthropologists have changed the way we look at human diversity. Diversity is no longer seen as pathological, or due to disease. Variation is accepted as normal for the vast majority of differences in humans.

Throughout my years of studying bones, conducting research on skeletal remains, and teaching osteology, I have delved deep into understanding human skeletal variation. And I have noticed that the acceptance and knowledge of human variation that anthropologists have so successfully explained did not necessarily translate to an understanding of human variation at the skeletal level. As an osteologist, I am often surprised at how little people understand about skeletal variation.

At the most basic level, understanding skeletal variation can stop people from falling victim to urban myths and common ungrounded fears. For example, a former dean at a university asked me about giants after images of giant skeletons being excavated appeared on the internet. The images were actually created for a contest in Photoshop skills. A quick look at these images showed proportions that are identical to those in skeletal models of average-sized humans. However, when genuine skeletons of abnormally large people are found, the body proportions are different from normal. Hands and feet, for instance, grow larger than other body parts in the most common form of gigantism, which results from pituitary brain tumors.

A lack of knowledge about skull variation has led to acceptance of alien theories. Culturally deformed skulls, such as the one from our teaching collection at San José State University (figure 1), are used as evidence of aliens or human-alien hybrids. Anthropologists have shown that cranial modification can be accomplished by shaping the malleable heads of young people, e.g., by binding. Furthermore, even nowadays, doctors use helmets to shape the heads of children who have been deformed by too much time on their backs or from various illnesses. But even individuals who accept that head shape can be changed point to differences in the skull sutures—the lines where the plates of the skull meet—as evidence of alien genes.

Yet skull sutures vary naturally and can be quite dramatically different from one person to the next within a population. Variation in sutures, including variation that creates extra bones (figure 2), is in part determined through genes and is used by anthropologists to determine relationships between populations. Throughout my years of looking at bones, I have come to realize that just as our external appearance is in large part a result of genetics, our bone differences are also controlled in large part by genes.

Everyone can benefit from understanding skeletal variation—it helps us avoid falling for fake news, for example. But practical applications of this knowledge can also help to prevent misclassification of crimes. CSI and other TV shows that involve forensics have been extremely popular recently; nearly all the students I have met in the last decade who are interested in physical anthropology want to be forensic anthropologists. Forensic anthropologists are key to solving crimes because they can identify sex, age, and cause of death from victims who have been found as skeletons. One misconception due to these TV shows has been that evidence of a gunshot wound can be found in perforated breastbones. This has now been addressed in various forensic journals. As the journal articles have clarified, holes in breastbones are a common skeletal variant. This normal variant does not look like the shattered bone one would expect from a bullet, but rather it is a neat hole with smooth sides (figure 3).

In doing research for Reading the Bones: Activity, Biology, and Culture, I noticed that forensic anthropologists are attempting to use bone variation to identify more than just age, sex, and cause of death. Some have used differences in upper arm bone diameters to look at whether the individual was left- or right-handed, arguing that the strength of the bone indicates which arm was used more. Some forensic anthropologists have also attempted to identify whether human remains are modern or prehistoric by looking at smooth areas on the shin, which are called kneeling facets, but I believe this endeavor may be futile since these may be an example of normal variation controlled by genes, not the result of activity that they have been named after. Thus, an understanding of skeletal variation can help prevent forensic scientists from jumping to erroneous conclusions. 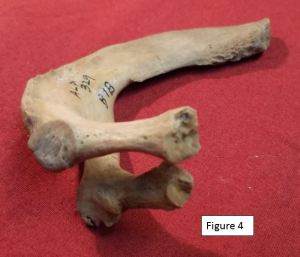 Having just finished my book, I took time to revisit the large skeletal collection of California Amerindians that I curate here at San José State University. I have spent over twelve years with these individuals and with each visit, I get to see their unique variation anew. There is never a time that I do not find something that catches my eye. In most cases, when I am with a group of student volunteers, there will be a chorus of questions: What was wrong with him? Did it hurt? How did that happen? But most of the time, the trait they notice—whether it is a two-headed rib (figure 4), a lumbar bone fused to the sacrum (figure 5), or an extra facet on the foot—is a result of normal variation likely caused by a minor genetic variant and in many cases did not cause the person pain. 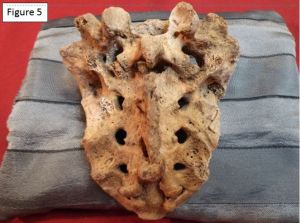 The amount of variation between human skeletons mirrors the variation we see in the outward appearance of people. Although skeletal variation is surprising to students of osteology, these same students have no problem understanding and accepting human variation on an external level. Showing that variation is more than skin deep is essential to training the next generation of osteologists. Anthropologists become teachers who educate our children, anatomists who train our future medical doctors, and instructors in many other fields. Helping students and those interested in the fascinating fields of anthropology understand skeletal variation will improve their ability to recognize the fantastical claims perpetuated by those with alternative agendas and misguided theories. I think that it is time for anthropologists to introduce the skeleton to the public, not in its most “normal” form, but rather in all the beautiful variants that are truly normal. 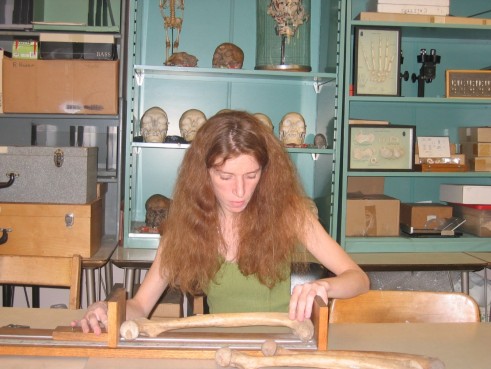 Elizabeth Weiss is the author of Reading the Bones: Activity, Biology, and Culture. She has been a professor of anthropology at San José State University (SJSU) since 2004; prior to joining the anthropology department at SJSU, Elizabeth had a post-doctoral research position at the Canadian Museum of Civilization in Ottawa. Elizabeth has worked with a variety of skeletal collections from Quebec Prisoners of War to British Columbian Indians. She continues to conduct research on past people’s bone biology using the California Indian collection she curates at SJSU.