“Tells the definitive and important story of how the Adrienne Arsht Center came to be the crown jewel of the performing arts in the great, diverse city of Miami, setting the bar for all cultural art venues that have followed in its path.”—Emilio Estefan

“In a class by itself. A compelling saga that will make everyone feel part of the journey from concept to completion.”—Arva Moore Parks, author of George Merrick, Son of the South Wind: Visionary Creator of Coral Gables

Discover how one spectacular building project revolutionized Miami, how one man’s moxie helped turn a fractious tropical city into a cultural capital of the Americas. In Center of Dreams: Building a World-Class Performing Arts Complex in Miami, New York Times bestselling author Les Standiford tells the inspiring story of the Adrienne Arsht Center for the Performing Arts.

The vision for this building, which would become the most ambitious cultural arts complex since the Kennedy Center, began in an unlikely place and time. Miami in the 1970s was divided by social and ethnic tensions. The city comprised a growing population of immigrants from the Cuban revolution, a well-established African American community, Florida “crackers,” and a continual influx of tourists and retirees. Critics said a cultural center would never be possible in a place of such extreme diversity.

But Parker Thomson, a lawyer and Boston transplant, knew his adopted city could become a world-leading community in the twenty-first century. He believed a performing arts center was critical to this vision. Everyone said his dream was impossible, he would never succeed, it couldn’t be done. Not in Miami. But Thomson persevered against political opposition, economic roadblocks, and engineering problems. It took thirty years to overcome the odds and the obstacles, but he finally made the dream a reality. With Thomson’s efforts, along with help from cultural leaders, iconic design work by architect Cesar Pelli, and support from philanthropist Adrienne Arsht, the center opened its doors in 2006 with a star-studded gala.

Today the Arsht Center is a cutting-edge venue of style and art, a landmark beloved by the city’s residents, and a magnet for tourists from all over the world. Presenting performances that celebrate the richness of Miami’s diverse population, it showcases emerging local artists and attracts international stars. Resident companies include the New World Symphony, the Florida Grand Opera, and the Miami City Ballet. Its improbable story is a testament to the influence of cultural advocacy, the importance of government support for the arts, and the power of the arts to repair and sustain communities. 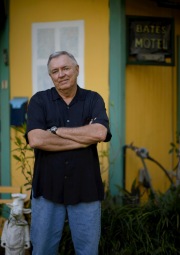 Les Standiford is founding director of the Creative Writing Program at Florida International University. He is the author of many novels and works of nonfiction, including Last Train to Paradise: Henry Flagler and the Spectacular Rise and Fall of the Railroad That Crossed an Ocean.

In this interview Les Standiford talks about his new book and the history of the Arsht Center.

You’ve now written about the enormous undertaking of both the Arsht Center and Flagler’s railroad from Miami to Key West. What do you find fascinating about these largescale projects?

I find it interesting to examine just how so-called “impossible” projects have become realities. Generally speaking it is the result of an individual’s belief that indeed the impossible can be accomplished, which to my mind constitutes an inspirational and enlightening story. As my father was fond of saying, “‘Can’t’ never accomplished anything.” These are also projects which have changed the way we live in South Florida and the story of their undertaking, building, and culmination illuminates much about our particular identity. Center of Dreams is as much a social history of modern Miami as it is the story of the making of a performing arts center.

The Arsht Center’s grand opening was in 2006. Why had Miami gone so long without a performing arts center?

Miami, having been founded shortly before the turn of the twentieth century, has a relatively short history compared to cities with comparable PACs such as Los Angeles, Chicago, New York, and Washington D.C. In truth, it is somewhat remarkable that such a “young” city found the wherewithal to create such an ambitious dual theater complex so early in its existence. It is a testament to the vision of those who fought to make it happen to recognize that such a center was vital to a city that aspired to true cultural significance.

Why do you think artists and performers gravitated to Miami, even before the Arsht Center was opened?

Miami and South Florida, at the end of the American road, have long exerted an exotic pull on the rest of the nation and the world at large. Miami is beautiful, fecund, mysterious to many, and one of the last places in the country to be explored and settled. It is a kind of American Casablanca—a gateway to the Caribbean and Latin America, where dreamers and get-rich schemers, the restless and the curious are perpetually drawn. The intrigue attendant to all the above, along with the heady mix of cultures and the generally benevolent climate, is a natural lure to the artistic soul.

The Arsht Center took more than 30 years to complete and was over-budget by hundreds of millions of dollars. Why do you think the city persevered with its construction despite numerous setbacks?

The continuing theme of the book is the struggle of those who believed in the overriding importance of the Center to carry on in the face of innumerable obstacles that arose. Attorney Parker Thomson, more than any other individual, was responsible for maintaining a focus on the ultimate importance of the Center to his adopted community despite every setback. As he was fond of telling fellow supporters disheartened by a negative council vote, “Don’t worry. There will be another meeting.” The cost of the Center did in fact nearly triple over the years from approval to opening, but most of those increases were due to procrastination on the part of government officials as opposed to building contractor shenanigans.

The Arsht Center had a number of vocal critics who didn’t support its construction. Do you think there are any valid arguments against creating a performing arts center?

In some cases, where tax revenues are tight, cities might well have to choose between expenditures on a center versus essential services such as water and sewer and road maintenance, fire and police protection, hospital upkeep, the needs of the homeless, and the like. However, Miami’s PAC was funded entirely through private donations combined with the Miami-Dade County bed tax levied on hotel room rentals—monies which are thusly restricted by statute. The most persuasive arguments against the construction of the PAC were made by those supporting small-scale cultural enterprises. They feared that the only beneficiaries of the Arsht would be Broadway-style shows, major musical revues, and the like, but those fears have been proven largely unfounded. The small venues continue to be supported and the Arsht’s offerings are varied and inclusive.

How do you believe the creation of the Arsht Center has affected Miami’s diversity?

In showcasing such undertakings as Gospel Sundays, a wide range of Caribbean and Latino offerings, “small” black-box shows such as Summer Shorts and Winter Shorts, the Alvin Ailey Summer Dance Camps for South Florida high school students, weekly farmer’s market and farm-to-table food events, the Arsht has become a beacon and a center for culture in all forms, including the grand extravaganzas that help to pay the bills and the lights on.

In the introduction for this book, Michael Spring, Director of the Miami-Dade County Department of Cultural Affairs, says that exposure to the arts can “suggest that there is more to life than simply surviving.” Why do you think this is true of the arts in particular?

The arts embody the very notion of personal transcendence and the will to accomplish and succeed. If a child goes to a play or a musical performance on a school outing at the Arsht and becomes inspired enough to think that he or she might be able to become a musician or a singer or an actor or a dancer and dedicates herself to that dream, disdaining all diversions leading down other less desirable paths, then the value of the Arsht to its community is proven. A government that does not do all in its power to encourage its citizens to dare to dream and inspire others in turn through artistic accomplishment is a short-sighted institution indeed.

You started off your writing career as a novelist writing mysteries, including the John Deal thriller series. What led you from this genre to writing history?

I have come to take great pleasure in pointing out to readers that sometimes what has truly happened can be as fascinating as anything a novelist might dream up. It is also gratifying to allow readers to see that there is often much to learn about subjects they might think they already know everything about. This was a favorite trope of the former much beloved newscaster Paul Harvey, who was fond of entrancing listeners with “The Rest of the Story.”

What project are you working on next?

I am working on a book about Mar-a-Lago and its importance in the rise of Palm Beach as the center of style, fashion, and exclusivity in Florida from the early days to the present. The range of personalities involved is noteworthy, from the residence’s creators, Marjorie Merriweather Post and E.F. Hutton, through the Kennedys, to President Trump.

Gainesville residents! Planning to run @fmbrewing’s Springs Run 7.2K next Saturday? Among other prizes, winners in each age group will receive a copy of DRAWN TO THE DEEP, our biography of Wes Skiles. A cave diver and nature photographer dubbed “Florida’s Jacques Cousteau,” Skiles was an expert on Florida's freshwater springs and an outspoken advocate for their conservation. Haven’t signed up yet? Let this be just one more reason to run! Sign up at bit.ly/SPRINGSRUN. The race benefits the @floridaspringsinstitute.
%d bloggers like this: