My Unlikely Path to an Apollo and Space Shuttle Career

Excerpt from Safely to Earth: The Men and Women Who Brought the Astronauts Home.

In this one-of-a-kind memoir, Jack Clemons—a former lead engineer in support of NASA—takes readers behind the scenes and into the inner workings of the Apollo and Space Shuttle programs during their most exciting years.

Readers may be surprised to learn that as a child, Clemons was not very interested in the types of toys you might expect a future engineer to love. He grew up loving comics and adventure stories—not mathematics. In this excerpt from his memoir, find out what inspired him to join Project Apollo and take part in some of the greatest adventures of the twentieth century.

Safely to Earth: The Men and Women Who Brought the Astronauts Home

I’m a Dreamer, Not an Engineer

“For my sixth birthday, my dad gave me a brand new Erector Set, and from that day on I knew I wanted to be an engineer!” Nope. That was never me.

A popular misconception is that we rocket scientists are a nerdy bunch, obsessed from the time we learn to read with building toys that fly. While that was the case for some, including an astronaut friend of mine, it wasn’t true for me or for a number of other engineers and technical people I know. It wasn’t our degree, but rather an early enthusiasm for human spaceflight that we shared, and which, given the opportunity, propelled us to be part of it. As an example, here’s a little background to illustrate the improbable route I took to work on the Apollo Moon Program. I know a number of professionals who traveled equally unlikely paths.

It is true that I got an Erector Set when I turned six. I remember unwrapping the rectangular metal box, painted red except for a drawing on the lid of a kid my age staring at some metal contraption he’d put together. I unlatched the hasps and lifted the lid and found a mystifying assembly of thin metal beams with holes drilled through them, and wheels, and a whole lot of screws, and a key-wound motor, and some printed directions, all neatly tucked into the spaces inside. I played with it for a time; I built a few simple towers that wouldn’t quite stay upright, and a wind-up crane that didn’t lift. I wasn’t good at getting the joints to fit so I spent more time constructing wobbly metal toys than playing with them. After a couple of weeks I put everything back in the box and never opened it again. I don’t remember seeing it after third grade when we moved to the other side of town.

I didn’t build model rockets when I was a teen either, though one of my friends did and I watched him fire one off, worrying the wind would blow it backward and onto me. I did have a chemistry set that I kept in the basement, but I only remember a concoction of powders that I mixed together in a mason jar. Somehow it got wet and exploded one day while I was at school; my mom threw out the box and its chemicals before I got home. I didn’t miss them.

My dad did all the repairs around the house; he even converted our attic space into a really nice bedroom for my sister. I tried helping him once or twice, but both times he ended up yelling at me just to get out of the way. He used to tell me, “You better get an education, because if you have to earn a living using your hands you’ll starve to death.” He said that quite a lot.

So, no, I didn’t always want to be an engineer—in fact, the thought of actually building something was daunting. Mostly I was a reader. I started with comic books, usually Batman and Superman, but some Scrooge McDuck too. My dad had been a state policeman for a time and he opened his own private detective agency when I was in middle school. That’s when I discovered the Hardy Boys—I read all thirty-four books that were available when I was eleven; I guess I was hoping my dad would take me out with him on one of his cases, like Fenton Hardy did with his sons. My father wasn’t persuaded, and that didn’t happen either.

I even wrote ten (mercifully) short stories called The Adventure Boys, complete with my hand-drawn illustrations that featured me and my best friend at the time, Jim Zeigler, solving crimes with my father. One story had the melodramatic and derivative title “The Clue of the Feathered Signet.” I still have a couple of those, which I guess is a measure of how, even then, my interest was in writing and dreaming, not in building.

By the time I reached middle school I’d outgrown both comics and the Hardy Boys, and a classmate friend introduced me to science fiction. I discovered Isaac Asimov’s robots, Ray Bradbury’s Mars, and Arthur C. Clark’s Moon. I was transfixed. It wasn’t the science so much as the call to adventure that appealed to me, though the likelihood of it ever being “real” back then wasn’t too removed from believing that Batman could fight crime from a cave.

In 1957 my older sister Mary married a young man named Bob Sunday, who literally changed my views on that. Bob was a U.S. Army veteran who had served in combat duty as a tank driver in the Korean War. He was a professional artist, a skilled concert organist, an avid photographer, and most important for me, an enthusiastic amateur astronomer. Bob was twelve years my senior, and when I was an early teen, he taught me to use his telescope and showed me wonders of the night sky—the stars of the Pleiades, the rings of Saturn, and the craters on the Moon. I’ve credited him often as being one of the two most influential people in my life, the other being John F. Kennedy, who inspired my interest in space and fueled my desire to be part of the team who put human beings on the Moon.

That’s where things stood when I went off to college in 1961. After my sister married, my mother and father moved from Pennsylvania to Florida in 1958 so that my dad could take a police officer’s job in a small beach town. I was a good enough student in high school to get a four-year scholarship to the University of Florida, but I was a thimblefingered dreamer with little appetite for building gadgets and little skill at other pursuits, and I was still adrift about what I wanted to be when I grew up. I could do advanced math well enough when I put my mind to it, but I never liked it—an indifference that continues to this day. Yet six years later I was an engineer working to get the first human beings on the Moon safely home.

My message is, judge your future engineer by her passions, not by her toys. 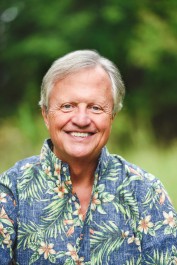 Jack Clemons, author of Safely to Earth: The Men and Women Who Brought the Astronauts Home, is a former lead engineer supporting NASA’s Apollo Program. He was also senior engineering software manager on the Space Shuttle Program. He was part of the mission control backroom team that supported the NASA flight controllers on both the return of the Apollo 11 crew from the first Moon landing and the rescue of the Apollo 13 crew. A former senior vice president of engineering for Lockheed Martin, he is a writer, consultant, and speaker about NASA’s space programs.