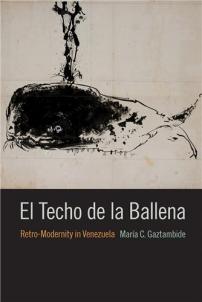 “Insightful, critical, and well written. A much-needed account of an artistic movement embodying rebellion and protest that functioned as a true avant-garde, challenging the status of art and countering the dominant mode of modernism—geometric abstraction—that has defined postwar Venezuelan art.”—Tatiana Flores, author of Mexico’s Revolutionary Avant-Gardes: From Estridentismo to ¡30–30!

The work of the 1960s Caracas-based art collective El Techo de la Ballena (The Roof of the Whale) was called subversive and seen as a threat to Venezuela’s national image as an emerging industrial power. El Techo de la Ballena: Retro-Modernity in Venezuela details the historical and social contexts that shaped the collective, exploring how it used the visual arts to expose the depths of injustice hidden beneath the façade of Venezuela’s rapid modernization.

El Techo de la Ballena was one of the first groups of the 1960s countercultural movement that used art to question the structural inequalities that undermined a true modernity in Venezuela. Their anti-art aesthetic highlighted the shortcomings of the country’s newfound oil wealth and transition to democracy. Every element used by these radicalized artists in their avant-garde exhibitions—from informalist canvases to works incorporating cattle carcasses and scatological content to experimental graphic design and installations expanding art into everyday life—issued a critique of Venezuela’s petroleum-driven economy and the profound inequality left in its wake. Embracing chaos, the artists contradicted the country’s politically sanctioned view of modernity, which championed constant progress in the visual arts and favored geometric abstraction and kinetic art. El Techo’s was a backward—a retrograde—modernity, argues María Gaztambide, discussing how its artists turned against the norm by incorporating anachronistic postures, primeval symbols, colonial Latin American print culture, and “guerilla” art tactics. They created art that reflected not the technological utopia promised by capitalism but rather the gritty reality of Caracas.

Artists in this group tested limits with shocking displays of criticism and frustration to provoke what they saw as a numbed local public. Today, as Venezuela undergoes another dramatic series of sociopolitical changes, El Techo de la Ballena serves as a reminder of the power of art in resisting the status quo and effecting change in society.

María C. Gaztambide is director and chief curator of Public Art of the University of Houston System. She previously served as the associate director of the International Center for the Arts of the Americas at the Museum of Fine Arts, Houston.