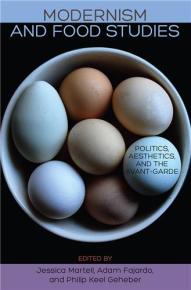 “This delicious collection traverses the globe—potatoes in Ireland, eggs in New Zealand, mangoes in Bengal—and explores the sensuous qualities of artistic modernism in its many forms. This collection makes a bold and clear case for the theoretical and historical importance of food studies to modernism.”—Catherine Keyser, author of Playing Smart: New York Women Writers and Modern Magazine Culture

“A strong addition to the practice of cultural materialism within modernist studies.”—Bonnie Roos, coeditor of Behind the Masks of Modernism: Global and Transnational Perspectives

Transnational in scope, Modernism and Food Studies: Politics, Aesthetics, and the Avant-Garde explores how modernist writers and artists address and critique the dramatic changes to food systems that took place in the early twentieth century. During this period, small farms were being replaced with industrial agriculture, political upheavals exacerbated food scarcity in many countries, and globalization opened up new modes of distributing culinary commodities.

Looking at a unique variety of art forms by authors, painters, filmmakers, and chefs from Ireland, Italy, France, the United States, India, the former Soviet Union, and New Zealand, contributors draw attention to modernist representations of food, from production to distribution and consumption. They consider Oscar Wilde’s aestheticization of food, Katherine Mansfield’s use of eggs as a feminist symbol, Langston Hughes’s use of chocolate as a redemptive metaphor for blackness, hospitality in William Faulkner’s Sanctuary, Ernest Hemingway’s struggles with gender and sexuality as expressed through food and culinary objects, Futurist cuisine, avant-garde cookbooks, and the impact of national famines on the work of James Joyce, Viktor Shklovsky, and Tarashankar Bandyopadhyay. Less celebrated topics of putrefaction and waste are analyzed in discussions of food as both a technology of control and a tool for resistance.

The diverse themes and methodologies assembled here underscore the importance of food studies not only for the literary and visual arts but also for social transformation. The cultural work around food, the editors argue, determines what is produced, who has access to it, and what can or will change. A milestone volume, this collection uncovers new links between seemingly disparate spaces, cultures, and artistic media and demystifies the connection between modernist aesthetics and the emerging food cultures of a globalizing world.