After 60 years at its main campus location on 15th Street, one block north of University Avenue, the University Press of Florida has moved to East Campus on Waldo Road. Our new editorial offices are located at 2046 NE Waldo Road, Suite 2100, Gainesville, FL 32609.

How does a publisher with almost 30 staff members, more than six decades of accumulated files, and one very special Fiddle Leaf Fig move? Watch this video to find out:

A Short History of the Buildings UPF Has Called Home

After our founding, UPF had offices and warehousing space at Florida Stadium, which would later be renamed Ben Hill Griffin Stadium and receive many, many renovations. 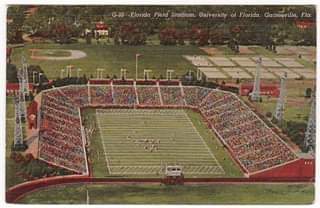 UPF’s first director Lewis F. Haines described our original offices at the stadium as having a very “Madison Avenue look.”

The 15th Street former fraternity house was indeed “charming,” but over the course of more than half a century, it sadly lost much of its luster.

With a host of amenities we were previously unaccustomed to—like a break room and working water fountain—the UPF staff is settling in to their new, modern office space at University of Florida’s East Campus. Meredith Morris-Babb, director, says, “This is what a university press should look like.”