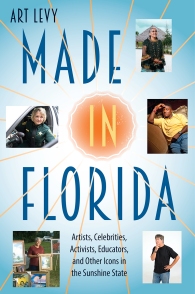 Written by Art Levy, author of Made in Florida: Artists, Celebrities, Activists, Educators, and Other Icons in the Sunshine State

Sitting one-on-one across a table from someone, asking questions, listening to the answers, asking more questions, that’s my journalistic comfort zone.

My University Press of Florida book—Made in Florida: Artists, Celebrities, Activists, Educators, and Other Icons in the Sunshine State—is the result of hundreds and hundreds of questions, asked during the course of hundreds of hours of interviews.

Asking those questions was the easy part. Now that the book has been published, I’m finding myself in a strange, uncomfortable place, sitting on the other side of the table. Now, I’m the one being asked the questions.

The one I get the most these days asks which of the book’s 90 interviewees is my favorite. That’s a hard question because I don’t really have a favorite. Nearly all of the interviewees were impressive, inspiring people and, while some of the interview experiences were more fun than others, I pretty much enjoyed them all.

But, if pressed, I’ll say Patrick Smith, the author of A Land Remembered, probably Florida’s most iconic novel.

It took a long time to get in touch with Smith and even longer to get him to say yes to an interview. Then, it was a long drive from my house in St. Petersburg to his in Merritt Island, but the interview was memorable. One reason it was special was that it happened in July 2013 and both of my sons, then 14 and 10, were off from school, so they came along with me.

Smith’s wife, Iris, opened the front door, and the first thing we saw was Smith, reclining in the hospital bed that had been set up in the couple’s living room.

His health was poor, the result of a stroke and emphysema, and a recent fall that left him with various broken bones. We had a fine talk, though, with my boys listening closely, about Smith’s life, from his fascination with Florida culture and history to the time he lived as a migrant farm worker in Homestead to research a novel that became Angel City.

Smith talked about mosquitoes and manatees and Florida traffic and how he used to love cruising down the Indian River in his Fleetwing boat. He talked about death and how, at 85, he wasn’t afraid of it, anymore.

There was something solemn about the ride back to St. Petersburg. We had met an important person, someone who made an impact, and we could tell he was nearing the end of his life.

We were sad to read in the newspaper, five months later, that Smith had died, but we were grateful that we had the chance to meet him.

Now, about my least favorite interviewee, that one’s easy. Ask me at my next book signing.

Art Levy is an award-winning journalist. He is associate editor of Florida Trend magazine. He has also written for the St. Petersburg Times and the Sarasota Herald-Tribune.