The Copa América and 100 Years of Football in Brazil 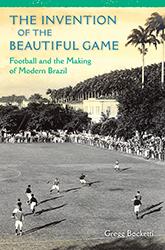 Written by Gregg Bocketti, author of The Invention of the Beautiful Game: Football and the Making of Modern Brazil

This month, Brazil is hosting the South American football championship, better known as the Copa América. First held in 1916, the Copa América is the oldest continental football competition in the world, and this year’s edition comes one hundred years after Brazil hosted—and won—the tournament for the first time, in 1919. Thus, the Brazilian national team, the seleção, turned out for the first match of this year’s tournament not in the team’s famous yellow and green but in white and blue, for these were the colors their forebears wore one hundred years ago. The uniforms reminded fans and viewers of Brazil’s rich football history and they served as emblems celebrating the centennial of the country’s first international title. Like all such anniversaries, the arrival of this one serves as an invitation to revisit the past and to situate the present in the course of history. Taking up that invitation, what is revealed is a story both of obvious change and of powerful, persistent legacies.

Only four teams competed in 1919—Argentina, Uruguay, Chile, and Brazil—and the entire tournament required only seven matches, reflecting the sport’s relatively recent arrival on the continent as well as the underdevelopment of both its football bureaucracy and its transportation infrastructure. One hundred years later, the tournament has evolved even beyond continental dimensions. It includes all ten members of the South American Football Confederation, and, as it has done since 1993, it also includes teams administrators have invited to participate from outside the continent; in 2019, these are Japan and Qatar. Fittingly, given the global stature of South American football, the audience is similarly global, with all of the tournament’s twenty-six matches broadcast live in dozens of countries around the world.

This global audience is matched by the global reach of the teams themselves, as they are filled with athletes who play professional football throughout the world. Some play in home countries, but there are also Bolivians in China, Peruvians in Russia, Venezuelans in England, and others playing everywhere from the United States to Spain to Saudi Arabia. The global market for South American footballers is nowhere clearer than in the Brazilian seleção. Of its twenty-three players, only three compete professionally in Brazil, while the rest play in Europe, in the world’s most competitive and wealthiest leagues, including the four who play in Italy, the four who play in Spain, and the seven who play in England.

Here the contrast with 1919 is especially glaring, since in 1919 all of the players representing Argentina, Brazil, Chile, and Uruguay played their football at home. Much more important in the view of contemporaries in 1919, every one of them was an amateur athlete, and any hint of remuneration was cause for scandal, for they understood payment to athletes as a corruption of Olympic ideals of playing for the love of the game. They believed that participation in international football entailed ethical questions and national honor, which helps explain not only their insistence on strict amateurism but also one of its consequences, the domination of national teams by middle-class and wealthy athletes who looked the part of sporting diplomats and could afford to practice and play without being paid for it.

Still, despite all of the differences between 1919 and 2019, certain essential ideas persist. Despite claims that the seleção has discarded old strictures and the enormous expansion of both Brazilian football and the Copa América, football in Brazil continues to be dominated by the dynamics of the country’s long-established geography of power and money. Before their transfers to European teams, almost every member of the current seleção played for clubs in the country’s wealthier South and Southeast regions, as was the case for their predecessors in 1919. Football administration is dominated by those same regions and many of the very same clubs.

Furthermore, despite—or perhaps because of—Brazil’s many successes since that first victory in 1919, observers have continued to freight international football with responsibility far beyond the playing field. Like their forebears in the early twentieth century, they continue to understand the sport as a way of performing the nation and revealing its character. The seleção in 2019 carries with it enormous expectations because of what have been perceived as failed performances in recent World Cup and Copa América tournaments. Its responsibility is even greater because many critics blame the team’s failures on what they say is the erosion of national identity due to globalization, which they see embodied in athletes who play and live abroad. The members of the seleção have also been drawn into debates over electoral politics, as their predecessors often were. Some have been vocal supporters of Brazil’s controversial new president, Jair Bolsonaro, who, like many Brazilian politicians, has hoped to use football to advance his public standing, including through involvement in the Copa América. Others, as well as the team’s head coach, are well-known critics of the president and his government, and have resisted his advances.

Brazil’s participation in the 2019 Copa América thus bears watching, and not only because it serves as an excellent chance for Brazil to add to its long list of football accomplishments. Brazil is a country that continues to measure its national life according to the football calendar, and the centenary of its first international championship is a reminder that much has changed over the course of the last hundred years—in Brazilian football and in Brazil—but many of the patterns set down in the past abide.

Gregg Bocketti, author of The Invention of the Beautiful Game: Football and the Making of Modern Brazil, is professor of history at Transylvania University in Lexington, Kentucky.