Excerpt from Made in Florida: Artists, Celebrities, Activists, Educators, and Other Icons in the Sunshine State, by Art Levy.

NASA aerospace engineer, first woman to serve as a senior executive at Kennedy Space Center, interviewed in May 2018, when she was seventy-seven, New Smyrna Beach.

My favorite birthday present as a child was a chemistry set.

What started me toward my career path of working in the space launch world was I saw Explorer 1 launch. I was a senior in high school. Seeing Explorer 1, and reading about it in the newspapers, and the fact that right away a discovery was made—the Van Allen radiation belt—I just thought that this is going to change the world I’m living in, and I wanted to be part of it.

The Apollo 11 launch was the first launch that I stayed in the firing room all the way through liftoff. I had moments when I felt like a goldfish in a bowl, even though I was surrounded by people. It was five hundred men and me.

Biology, math, science—all of those kinds of subjects—were real important to my parents, so I became fearless about math and science. I was never afraid of those subjects, which is something that happened to a lot of girls of my generation.

I worked for the Army Ballistic Missile Agency when I was seventeen. I was assigned to the missile-firing lab, where the big job there was launching the Redstone and Juno rockets. That was Wernher von Braun’s laboratory. I went to work on a Monday. I worked on my first launch on Friday. I was given a tracking device and trained along with two soldiers, and we each stood out at night on the tarmac outside of Hanger D at Cape Canaveral, mapping when the first and second stages separated. The only reason I got to do it was one of the German scientists gave us all a hand-eye-coordination test and I was the youngest and I had been a piano player, so I had the best hand-eye coordination.

I’ve set a physical fitness goal that I want to be able to ski every year. I want to be skiing when I’m eighty.

In the firing room during an Apollo launch, we were on television all the time, and that television could be viewed in Houston or California or Washington or wherever, so I did get obscene phone calls at my console and some other weird things happened because not every man who was there thought that I deserved to be there or should be there because I was a woman.

A television guy, one time he came down, and he said: “JoAnn, I have to tell you something. When somebody brings paperwork to you and they want you to lean over your console to sign it, make them come around to you. Just sit there. Don’t get up. Make them come to you, because when you get up the TV techs get inquiries to zoom in the television camera on your butt.” I was horrified. My husband was horrified, too.

I’m very disappointed in Florida’s lack of preserving some of its precious environment. You know, when I was in high school, I could go to the Indian River in Titusville, and the water was crystal clear. You could swim and see the manatees and pompano. Pompano haven’t been in the Indian River in many years, decades maybe.

Basically, I’m a child of war. I was born in 1940, and the very earliest memories I have are of my dad and uncles in their uniforms, going away.

With the Space Shuttle, if I faced directly toward the launch pad, even three miles away, I could feel the shock waves hit my sternum.

I’ve started working with six or seven institutions to create scholarships to help young women who want to be engineers.

As far as higher education, I feel like that’s one of our state’s brightest stars.

Part of my bucket list is I’d like to master voice-activated software and get a self-driving car.

I’m so lucky. I never had a dull day. I had bad days—and a bad day in the space business means one of those horrible disasters and loss of life and billions of dollars affected in flight hardware. That part is devastating and hard, but getting back and figuring out what went wrong and making it better is what big achievements are all about.

One of my jobs, I was associate director for Space Shuttle upgrades and advanced development. The Shuttles had been built and designed for either twenty years or one hundred missions. Well, the twenty years was ending, but they hadn’t gotten near one hundred missions, but the technology was old and the Shuttles needed upgrades. They were like teenagers with bad skin who needed a brain transplant.

I still play the piano. After that movie La La Land came out, I pretty much learned to play most of the piano music from it—and I’m also playing blues harmonica. I went to the John C. Campbell Folk School in North Carolina, and they had a really good harmonica teacher there. I’m a terrible harmonica player, though. All my friends, when I start to play, they’ll say, “Oh, spare us!” 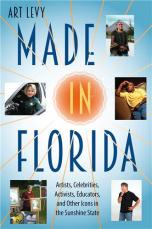 Read more interviews with Florida’s most fascinating personalities in Made in Florida: Artists, Celebrities, Activists, Educators, and Other Icons in the Sunshine State. This book showcases a colorful lineup of notable people who got their start in the state and who have helped make it the unique, diverse place it is today.  Order here and use code NASA for a discount price, valid through July 31, 2019.