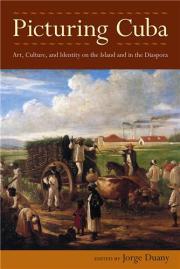 “Compelling and relevant. Takes readers on a journey through the history of Cuban art’s significance, demonstrating how art has mirrored the cultural life of the country as well as how politics affect the production of art itself.”—Isabel Alvarez Borland, coeditor of Cuban-American Literature and Art: Negotiating Identities

Picturing Cuba: Art, Culture, and Identity on the Island and in the Diaspora explores the evolution of Cuban visual art and its links to cubanía, or Cuban cultural identity. Featuring artwork from the Spanish colonial, republican, and postrevolutionary periods of Cuban history, as well as the contemporary diaspora, these richly illustrated essays trace the creation of Cuban art through shifting political, social, and cultural circumstances.

Contributors examine colonial-era lithographs of Cuba’s landscape, architecture, people, and customs that portrayed the island as an exotic, tropical location. They show how the avant-garde painters of the vanguardia, or Havana School, wrestled with the significance of the island’s African and indigenous roots, and they also highlight subversive photography that depicts the harsh realities of life after the Cuban Revolution. They explore art created by the first generation of postrevolutionary exiles, which reflects a new identity—lo cubanoamericano, Cuban-Americanness—and expresses the sense of displacement experienced by Cubans who resettled in another country. A concluding chapter evaluates contemporary attitudes toward collecting and exhibiting post-revolutionary Cuban art in the United States.

Encompassing works by Cubans on the island, in exile, and born in America, this volume delves into defining moments in Cuban art across three centuries, offering a kaleidoscopic view of the island’s people, culture, and history.

Jorge Duany is director of the Cuban Research Institute and professor of anthropology at Florida International University. He is the author of several books, including Un pueblo disperso: Dimensiones sociales y culturales de la diáspora cubana and Blurred Borders: Transnational Migration between the Hispanic Caribbean and the United States.