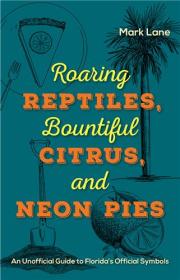 “This old Florida boy has been waiting for such a book for a coon’s age. I learned a lot about the origins of our state’s symbols and laughed a lot while reading. It’s a great combination, like butter and grits.”—Jeff Klinkenberg, author of Son of Real Florida: Stories from My Life

With an eye for the illogical and a flair for the irreverent, journalist Mark Lane aims his sharp wit at one of the most intriguing duties of the Florida legislature—signing state symbols into law. In Roaring Reptiles, Bountiful Citrus, and Neon Pies: An Unofficial Guide to Florida’s Official Symbols, he spotlights nineteen things that have been proposed and/or appointed to officially define Florida.

Lane guides readers through the often-comic historical events that led to the selection of Florida’s official fruit, tree, gem, bird, song, and other items ranging from the well known to the obscure, packing in personal stories and laugh-out-loud moments along the way. Did you know the state slogan was almost “the alligator state”? Or that a mailbox in the shape of the state marine mammal can tell you a lot about a person? Readers will also discover that the bill proposing the state soil caused a crisis in the Senate and that the state play—written in the peculiar genre of symphonic outdoor drama—puts a heroic spin on the grisly European conquest of St. Augustine.

“Full of the kind of unnecessary commentary that might cause trouble,” as Lane describes it, this book is also written with affection toward the wide diversity of lives and experiences that make up the state he calls home. He shows that deciding the things that represent us at any given moment is far trickier than it appears. Especially in Florida, a state aptly symbolized by “a lot of contradictions baked into a Key lime pie.”

Mark Lane, metro columnist and feature writer at the Daytona Beach News-Journal, is the author of Sandspurs: Notes from a Coastal Columnist.