6 Ways You Can Help Immigrants Facing Detention and Deportation 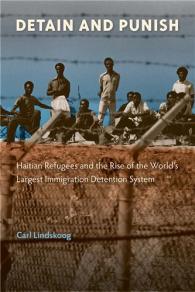 As part of the eighth annual University Press Week, we are highlighting the work of Carl Lindskoog, author of Detain and Punish: Haitian Refugees and the Rise of the World’s Largest Immigration Detention System. This year’s UP Week theme—“Read. Think. Act.”—emphasizes the role that scholarly publishers play in moving national and international conversations forward on critical and complex issues. By publishing books like Detain and Punish, University Press of Florida does just that. Lindskoog’s book shows how systems designed for Haitian refugees in the 1980s laid the groundwork for the way immigrants to America are treated today, providing essential historical context for the challenges faced by today’s immigrant groups.

We asked Carl Lindskoog what actions individuals should take if, after learning about the history and present realities of immigration detention in the United States, they are concerned and eager to help. Here are his suggestions.

How You Can Help Immigrants Facing Detention and Deportation

1. Support the resistance of people inside immigration prisons.
Detained immigrants are resisting their imprisonment by engaging in hunger strikes, protests, and other acts of resistance. And organizations like La Resistencia are supporting them by forming solidarity campaigns and by bringing attention to their campaigns. Learn more.

2. Help bond immigrants out of detention.
Many immigrants remain in detention because they simply cannot afford the high bond amounts set by immigration judges or U.S. Immigration and Customs Enforcement (ICE). Organizations like Freedom for Immigrants have created a National Immigration Detention Bond Fund to mobilize resources to free them. Contribute here.

3. Pressure corporations to divest from private immigration prisons. Work to defund the agencies responsible for locking up immigrants and asylum seekers.
Activists with groups like Make the Road NY and Moms Rising have been mounting escalating pressure on corporations to divest from private immigration prisons. Join the movement here. And through organizations like Detention Watch Network, activists are also pressuring lawmakers to defund ICE and Customs and Border Protection (CBP). Join the movement here.

4. Join a network of immigrant rights activists.
Organizations like United We Dream are connecting and mobilizing activists in defense of immigrants and their communities at the state, local, and national level. Join here.

6. Become an abolitionist.
Immigration detention is just a portion of the United States’ immense system of mass incarceration. But a growing movement of activists are mobilizing to abolish this cruel, unjust, and racist system. Learn more here and join the movement here.

Carl Lindskoog, author of Detain and Punish: Haitian Refugees and the Rise of the World’s Largest Immigration Detention System, is assistant professor of history at Raritan Valley Community College. He is currently at work on a book that focuses on revolution, migration, and the Sanctuary Movement from Reagan to Trump. Follow him on Twitter and learn more about his historical perspective on U.S. immigrant detention in this Washington Post op-ed.