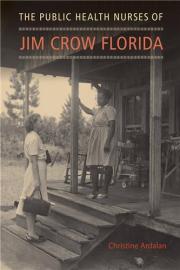 “This book is seminal not only for scholars and public policy makers seeking to understand the complicated clinical, political, and social role of public health nursing but also, as importantly, for those seeking to understand the racial and economic structures affecting health care in the American South.”—Patricia D’Antonio, author of Nursing with a Message: Public Health Demonstration Projects in New York City

“Ardalan has provided an invaluable service by showing the ways in which nurses were on the front lines of bringing medical care and health resources to Floridians in the early twentieth century.”—Richard M. Mizelle Jr., author of Backwater Blues: The Mississippi Flood of 1927 in the African American Imagination

“Brings to life the challenges that faced Florida’s public health nurses working with rural poor black and white residents despite minimal support from state and local governments.”—James B. Crooks, author of Jacksonville: The Consolidation Story, from Civil Rights to the Jaguars

In the era of Jim Crow discrimination, their marginalization in medical facilities—along with the overall medical neglect to address their health—meant that many African Americans in rural communities rarely saw doctors. Christine Ardalan shows how Florida’s public health nurses took up the charge, traveling into the Florida scrub to deliver health improvement information to the homes of black and white residents, many of whom were illiterate. Drawing on a rich body of public health and nursing records, Ardalan draws attention to the innovative ways nurses bridged the gap between these communities and government policies that addressed threats of infection and high rates of infant and maternal mortality.

From the progressive era to the civil rights movement, Florida’s public health nurses worked to overcome the constraints of segregation. Their story is echoed by the experiences of today’s community health nurses, who are keenly aware that maintaining healthy lives for all Americans requires tackling the nation’s deep-rooted cultural challenges.

Christine Ardalan, lecturer of history at Florida International University, is the author of Great Hearts, Great Minds and a Love for Children: Nursing at Miami Children’s Hospital 1950–2008.