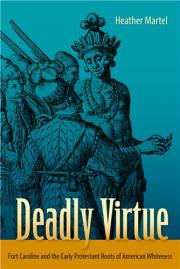 “Fresh and innovative. Using a comparative and Atlantic World perspective, Martel suggests alternate ways of looking at colonial Florida and provides new answers to old questions regarding settler-native interactions during the sixteenth century.”—Daniel S. Murphree, author of Constructing Floridians: Natives and Europeans in the Colonial Floridas, 1513–1783

In Deadly Virtue: Fort Caroline and the Early Protestant Roots of American Whiteness, Heather Martel argues that the French Protestant attempt to colonize Florida in the 1560s significantly shaped the developing concept of race in sixteenth-century America. Telling the story of the short-lived French settlement of Fort Caroline in what is now Jacksonville, Florida, Martel reveals how race, gender, sexuality, and Christian morality intersected to form the foundations of modern understandings of whiteness.

Equipped with Calvinist theology and humoral science, an ancient theory that the human body is subject to physical change based on one’s emotions and environment, French settlers believed their Christian love could transform the cultural, spiritual, and political allegiances of Indigenous people. But their conversion efforts failed when the colony was wiped out by the Spanish. Martel explains that the French took this misfortune as a sign of God’s displeasure with their collaborative ideals, and from this historical moment she traces the growth of separatist colonial strategies.

Through the logic of Calvinist predestination, Martel argues, colonists came to believe that white, Christian bodies were beautiful, virtuous, entitled to wealth, and chosen by God. The history of Fort Caroline offers a key to understanding the resonances between religious morality and white supremacy in America today.

THE PUBLIC HEALTH NURSES OF JIM CROW FLORIDA highlights the long unacknowledged role of a group of pioneering professional women who battled racism in a state where white supremacy formed the bedrock of society. You can find the book at upress.ufl.edu. #WomensHistoryMonth
Loading Comments...
Comment
×
%d bloggers like this: