The Florida Historical Society has an extensive honors program recognizing significant contributions to knowledge of our state.

We are pleased to announce our four award-winning books in this year’s competition.

CHARLTON TEBEAU AWARD
Named in honor of the late Charlton W. Tebeau, longtime University of Miami history professor and author of the acclaimed book A History of Florida among other important works. This category is for a general-interest book on a Florida history topic.

With an eye for the illogical and a flair for the irreverent, journalist Mark Lane aims his sharp wit at one of the most intriguing duties of the Florida legislature—signing state symbols into law. In Roaring Reptiles, Bountiful Citrus, and Neon Pies, he spotlights nineteen things that have been proposed and/or appointed to officially define Florida.

Lane guides readers through the often-comic historical events that led to the selection of Florida’s official fruit, tree, gem, bird, song, and other items ranging from the well known to the obscure, packing in personal stories and laugh-out-loud moments along the way. Did you know the state slogan was almost “the alligator state”? Or that a mailbox in the shape of the state marine mammal can tell you a lot about a person? Readers will also discover that the bill proposing the state soil caused a crisis in the Senate and that the state play—written in the peculiar genre of symphonic outdoor drama—puts a heroic spin on the grisly European conquest of St. Augustine.

REMBERT PATRICK AWARD
Named in honor of the late Rembert W. Patrick, longtime University of Florida history professor and author of the acclaimed book Florida Under Five Flags and other important works. This category is for a scholarly book on a Florida history topic. 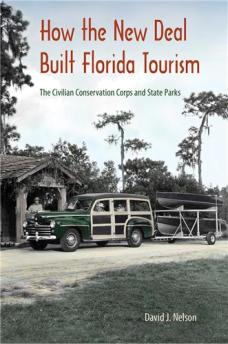 Countering the conventional narrative that Florida’s tourism industry suffered during the Great Depression, this book shows that the 1930s were, in reality, the starting point for much that characterizes modern Florida’s tourism. David Nelson argues that state and federal government programs designed to reboot the economy during this decade are crucial to understanding the state today.

Nelson examines the impact of three connected initiatives—the federal New Deal, its Civilian Conservation Corps program (CCC), and the CCC’s creation of the Florida Park Service. He reveals that the CCC designed state parks to reinforce the popular image of Florida as a tropical, exotic, and safe paradise. The CCC often removed native flora and fauna, introduced exotic species, and created artificial landscapes that were then presented as natural. Nelson discusses how Florida business leaders benefitted from federally funded development and the ways residents and business owners rejected or supported the commercialization and shifting cultural identity of their state.

HARRY T. AND HARRIETTE V. MOORE AWARD
Named in honor of the late Harry and Harriette Moore,who were murdered in 1951 because of their civil rights and voter registration efforts throughout Florida. This category recognizes an outstanding book relating to Florida’s ethnic groups, or dealing with a significant social issue from a historical perspective.

In the era of Jim Crow discrimination, their marginalization in medical facilities—along with the overall medical neglect to address their health—meant that many African Americans in rural communities rarely saw doctors. Christine Ardalan shows how Florida’s public health nurses took up the charge, traveling into the Florida scrub to deliver health improvement information to the homes of black and white residents, many of whom were illiterate. Drawing on a rich body of public health and nursing records, Ardalan draws attention to the innovative ways nurses bridged the gap between these communities and government policies that addressed threats of infection and high rates of infant and maternal mortality.

STETSON KENNEDY AWARD
Dr. William R. Jones, Chair of Black Studies at FSU, has said, “Stetson Kennedy may well go down as our first investigative historian.”  A native of Jacksonville, (1916–2011), Stetson authored such works as Palmetto Country, Southern Exposure, The Klan Unmasked, Jim Crow Guide, After Appomattox, and We Charge Genocide.  The foundation which bears his name and seeks to carry forward his legacy is sponsoring this award, for books which cast light on historic Florida events in a manner which is supportive of human rights, traditional cultures, or the natural environment.

America’s wettest state is running out of water. Florida—with its swamps, lakes, extensive coastlines, and legions of life-giving springs—faces a drinking water crisis. Drying Up is a wake-up call and a hard look at what the future holds for those who call Florida home.

Journalist and educator John Dunn untangles the many causes of the state’s freshwater problems. Drainage projects, construction, and urbanization, especially in the fragile wetlands of South Florida, have changed and shrunk natural water systems. Pollution, failing infrastructure, increasing outbreaks of toxic algae blooms, and pharmaceutical contamination are worsening water quality. Climate change, sea level rise, and groundwater pumping are spoiling freshwater resources with saltwater intrusion. Because of shortages, fights have broken out over rights to the Apalachicola River, Lake Okeechobee, the Everglades, and other important watersheds.

All University Press of Florida books are available at discount prices in honor of our anniversary year. Order on our website and use code UPF75 for up to 40% off and $1 per book shipping.