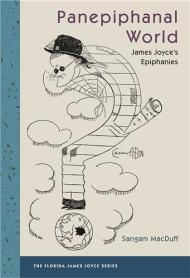 An Open Access edition of this book was published with the support of the Swiss National Science Foundation. It is available at https://ufdc.ufl.edu/l/AA00070774/00001.

“This highly readable and well-written book covers Joyce’s main texts in order to analyze the Irish writer’s art of the epiphany with great acumen and gusto. Panepiphanal World is bound to become a classic of Joycean criticism given the widespread interest in a specific genre that has been neglected for more than forty years.”—Jean-Michel Rabaté, author of The Ghosts of Modernity

“Panepiphanal World is the most substantial and detailed study of epiphany concentrating solely on Joyce himself.”—Morris Beja, author of Epiphany in the Modern Novel

Panepiphanal World: James Joyce’s Epiphanies is the first in-depth study of the forty short texts James Joyce called “epiphanies.” Composed between 1901 and 1904, at the beginning of Joyce’s writing career, these texts are often dismissed as juvenilia. Sangam MacDuff argues that the epiphanies are an important point of origin for Joyce’s entire body of work, showing how they shaped the structure, style, and language of his later writings.

Tracing the ways Joyce incorporates the epiphanies into Dubliners, A Portrait of the Artist as a Young Man, Ulysses, and Finnegans Wake, MacDuff describes the defining characteristics of the epiphanies—silence and repetition, materiality and reflexivity—as a set of recurrent and inter-related tensions in the development of Joyce’s oeuvre. MacDuff uses fresh archival evidence, including a new typescript of the epiphanies that he discovered, to show the importance of the epiphanies throughout Joyce’s career.

MacDuff compares Joyce’s concept of epiphany to classical, biblical, and Romantic revelations, showing that instead of pointing to divine transcendence or the awakening of the sublime, Joyce’s epiphanies are rooted in and focused on language. MacDuff argues that the Joycean epiphany is an apt characterization of modernist literature and that the linguistic forces at play in these early texts are also central to the work of Joyce’s contemporaries including Woolf, Beckett, and Eliot.

It's #BookGiveaway time! You can win a signed copy of A PUNKHOUSE IN THE DEEP SOUTH by Aaron Cometbus & Scott Satterwhite. Visit the link in our bio to enter before October 31!
Loading Comments...
%d bloggers like this: