“Naturally becomes a baseline body of work from which to understand historical tourism development. Highly recommended.”—Choice

“[A] much-welcomed, concise survey of Florida tourism from the days of Ponce de León to the present. . . . Provid[es] an engaging narrative. Tourists’ letters, popular travel guides, and the most recent scholarship inform this statewide study. Academics, students, and general readers interested in tourism and southern history will find this a rigorous, entertaining, and insightful overview.”—Journal of American History

“This well-researched, tightly organized and highly readable account of the interaction between the Florida tourist industry and the tourists it attracted offers insights into the evolution of social, economic and environmental attitudes of residents and visitors alike. It is an entertaining romp through Florida history.”—American Studies Journal

“Synthesizes existing scholarship on the history of Florida tourism into a lithe volume. . . . An important contribution to the field of Florida’s economic and social development.”—Journal of Southern History

“A narrative history embedded with analysis, this work does a good job of describing the evolution of tourism in Florida. Not shying away from the downsides of tourism there—racism, environmental damage, unfortunate impacts on host communities—the book illustrates just how important tourism has long been for Florida’s economic and social development.”—Cambridge Business History Review

“An enlightening journey through Florida’s diverse and evolving tourism history, illustrating the changing face of tourism over the years, and how Floridians have coped with these changes. An informative look at Florida’s past efforts to woo tourists, and the mixed blessings that tourism has brought to the Sunshine State.”—Brian Rucker, author of Image and Reality

“At last—a readable, concise history of Florida tourism from the earliest European discovery to the present. Revels’s prose sizzles. Her ability to summarize and analyze more than 300 years of Florida tourism in just over 200 pages is truly stunning. It is a remarkable achievement. Sunshine Paradise both entertains and informs on every page, and it should be required reading for policy makers and everyone else who needs to know how current Florida came to be.”—James M. Denham, professor of history and director, Lawton M. Chiles Jr., Center for Florida History, Florida Southern College

“A dynamic biography of a remarkable scientific figure. . . . Fans of scientific history and those just looking for a fascinating new read are in for a treat.”—Foreword Reviews

“In Jared Buss’s nuanced biography, the German-born rocket expert emerges as a spirited science educator whose promotion of space exploration paved the way for NASA’s triumphs.”—Nature

“A worthwhile contribution that rightfully restores Ley’s place in the history of twentieth-century science.”—Journal of American History

“Buss rightly sheds light on a man whose sense of optimism and imagination exemplified American popular culture’s own feelings toward the future during this period. An engaging, accessible read that will appeal to anyone interested in the history of space exploration.”—Choice

“Puts Ley’s career into a bigger picture of changing perspectives about science and society.”—Space Review

“Buss . . . convinces us that while Ley was often quite literally behind the curtain he was a crucial architect of the spaceflight consensus and the narratives that supported it. Willy Ley will, no doubt, be a crucial Launchpad for further investigations of space history and the science fiction that is a part of it.”—Science Fiction Studies

“Willy Ley has been a mystery among spaceflight historians for many years. His role as science writer, advocate, and popularizer is known to many but understood by few. This book unpacks that story.”—Roger D. Launius, associate director of collections and curatorial affairs, National Air and Space Museum

“Ley lit the fire of interplanetary enthusiasm in the hearts of generations of young space cadets. Long overdue, this biography establishes the details and the ups and downs of his career.”—Tom D. Crouch, author of Lighter Than Air: An Illustrated History of Balloons and Airships

“Beyond recovering the fascinating and many contradictory aspects of Ley’s extraordinary life, Buss has provided a valuable case study of the complex relationship between science popularization, mass media, and scientific advocacy in the twentieth century.”—Asif A. Siddiqi, author of The Red Rockets’ Glare: Spaceflight and the Soviet Imagination, 1857-1957 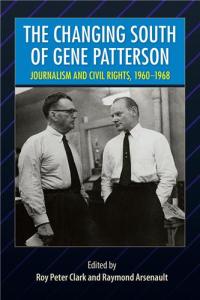 The Changing South of Gene Patterson: Journalism and Civil Rights, 1960-1968

“Not often can we see history being written. Seldom can we go back in time with one who was there. Rarely can we watch events push the past into the future. But through Gene Patterson’s newspaper columns…we can witness how the South of yesterday became the South of today.”—St. Petersburg Times

“What emerges from these individual pieces is not the career history of one newspaperman, but a beautifully nuanced portrait of a community, a region, and a people at an undeniable turning point.”—Atlanta Journal-Constitution

“[These] more than 3,000 columns represent one of the most impressive bodies of work in the journalism of the 20th century.”—National Press Club

“An admirable compilation of primary sources for understanding a Southern mind amidst the civil rights movement….As historians work to understand the Southern white mind amidst the changes of the second Reconstruction, the strengths, inconsistencies, and equivocations of Gene Patterson will be a useful guide.”—H-Florida

“A collection of columns written by one of the most gifted writers of our time….[S]uperb examples and rich reading for anyone interested not only in history, but also in excellent journalism that helped to tell the stories of race in America in the mid-20th century.”—Nieman Reports

“A study of a moderate southern journalist like Gene Patterson reveals a much more contemplative and socially conscious South: a South doing its best to come to grips with the demands of equality and morality.”—Southern Historian

“In pointing us toward how to be ‘better than we are,’ Gene Patterson—passionate, funny, sound of mind and full of heart—coincidentally reminds us just how fine journalism can be. This is a wonderful, inspiring book.”—Geneva Overholser, syndicated columnist, Washington Post Writers Group, and Curtis B. Hurley Chair in Public Affairs Reporting, University of Missouri

“Proves that journalism at its best can endure as literature. A compelling portrait of the 1960s and the American South by an engaged participant and acute observer.”—Robert Schmuhl, University of Notre Dame