Geopolitics, Culture, and the Scientific Imaginary in Latin America 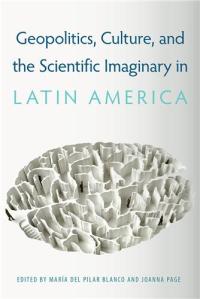 “The most inclusive, informative, and up-to-date volume I have seen regarding science and culture in Latin America. An excellent choice for both the classroom and the individual researcher.”—Jerry Hoeg, coauthor of Reading and Writing the Latin American Landscape

“What is the role played by Latin America in the formation of global science? What is the role performed by science in the shaping of the imaginary in Latin America? Many will surely respond the same to both questions: they will say it has been a subsidiary or marginal role, or that they do not know. After reading this book—diverse, interdisciplinary, and highly topical—one can only agree that neither science nor Latin America are what we thought they were.”—Juan Pimentel, author of The Rhinoceros and the Megatherium: An Essay in Natural History

Challenging the common view that Latin America has lagged behind Europe and North America in the global history of science, Geopolitics, Culture, and the Scientific Imaginary in Latin America reveals that the region has long been a center for scientific innovation and imagination. It highlights the important relationship among science, politics, and culture in Latin American history.

Scholars from a variety of fields including literature, sociology, and geography bring to light many of the cultural exchanges that have produced and spread scientific knowledge from the early colonial period to the present day. Among many topics, these essays describe ideas on health and anatomy in a medical text from sixteenth-century Mexico, how fossil discoveries in Patagonia inspired new interpretations of the South American landscape, and how Argentinian physicist Rolando García influenced climate change research and the field of epistemology.

Through its interdisciplinary approach, Geopolitics, Culture, and the Scientific Imaginary in Latin America shows that such scientific advancements fueled a series of visionary utopian projects throughout the region, as countries grappling with the legacy of colonialism sought to modernize and to build national and regional identities.

María del Pilar Blanco is associate professor of Spanish American literature and fellow and tutor in Spanish at Trinity College, University of Oxford. She is the author of Ghost-Watching American Modernity: Haunting, Landscape, and the Hemispheric Imagination. Joanna Page is a Reader in Latin American literature and visual culture at the University of Cambridge. She is the author of several books, including Creativity and Science in Contemporary Argentine Literature: Between Romanticism and Formalism.

THE PUBLIC HEALTH NURSES OF JIM CROW FLORIDA highlights the long unacknowledged role of a group of pioneering professional women who battled racism in a state where white supremacy formed the bedrock of society. You can find the book at upress.ufl.edu. #WomensHistoryMonth
Loading Comments...
Comment
×
%d bloggers like this: