From Saloons to Steak Houses 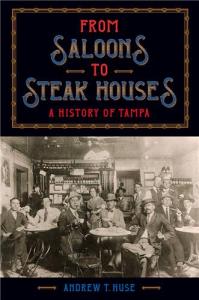 “This rollicking ride through Tampa history captures the flavor of the city through the stories of some of its most colorful and legendary people and places. From bootleggers and jook joints to labor strikes and sit-ins, this is social history at its finest.”—Janine Farver, former executive director, Florida Humanities Council

“Takes the reader on a tour of Tampa that is sometimes seedy, sometimes glamorous, but at all times entertaining.”—Rodney Kite-Powell, coauthor of Tampa Bay’s Waterfront: Its History & Development

Since its early days as a boomtown on the Florida frontier, Tampa has had a lively history rich with commerce, cuisine, and working-class communities. In From Saloons to Steak Houses: A History of Tampa, Andrew Huse takes readers on a journey into historic bars, theaters, gambling halls, soup kitchens, clubs, and restaurants, telling the story of Tampa’s past through these fascinating social spaces—many of which can’t be found in official histories.

Beginning with the founding of modern Tampa in 1887 and spanning a century, Huse delves into the culture of the city and traces the struggles that have played out in public spaces. He describes temperance advocates who crusaded against saloons and breweries, cigar workers on strike who depended on soup houses for survival, and civil rights activists who staged sit-ins at lunch counters. These stories are set amid themes such as the emergence of Tampa’s criminal underworld, the rise of anti-German fear during World War I, and the heady power of prosperity and tourism in the 1950s.

Huse draws from local newspaper stories and firsthand accounts to show what authorities and city residents saw and believed about these establishments and the people who frequented them. This unique take on Tampa history reveals a spirited city at work and play, an important cultural hub that continues to both celebrate and come to terms with its many legacies.

Andrew T. Huse is the author of The Columbia Restaurant: Celebrating a Century of History, Culture, and Cuisine. A librarian with the University of South Florida’s Special Collections department, he lectures across the state about Florida history and foodways.