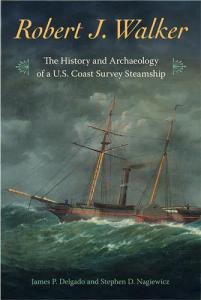 “The story of Robert J. Walker is quite interesting and is an excellent example of how historical research can provide detailed context and illustrate the significance of dive sites. It shows the ultimately rewarding results of partnerships, mutual respect, and cooperation.”—Della A. Scott-Ireton, editor of Between the Devil and the Deep: Meeting Challenges in the Public Interpretation of Maritime Cultural Heritage

“A story of heated conflict and ultimate cooperation, from nineteenth-century bureaucrats and naval officers to twenty-first-century government archaeologists and civilian sport divers.”—P.J. Capelotti, author of Adventures in Archaeology: The Wreck of the “Orca II” and Other Explorations

Robert J. Walker: The History and Archaeology of a U.S. Coast Survey Steamship tells the story of the steamship Robert J. Walker, an early coastal survey ship for the agency that would later become the National Oceanic and Atmospheric Administration (NOAA), that sank with loss of 21 crew off the coast of New Jersey in 1860. The wreck was a frequent stop for divers and anglers before it was identified by a team of researchers in 2013. Here, leaders in the documentation efforts describe the history of the ship and the archaeology of the shipwreck, emphasizing the collaborative community participation that made the project successful.

James Delgado and Stephen Nagiewicz highlight the contributions of government archaeologists from NOAA as well as local divers from varying backgrounds. Although such groups are not typically known for working together, they united to achieve the shared goal of mapping and interpreting this historically significant shipwreck. Delgado and Nagiewicz show how incorporating local knowledge both improves archaeological work and empowers community members as stakeholders, inspiring residents to promote their maritime heritage.

James P. Delgado, senior vice president of SEARCH, Inc., is the author of nearly forty works including the Encyclopedia of Underwater and Maritime Archaeology. Stephen D. Nagiewicz is a former dive charter boat operator with over 30 years of experience scuba diving in search of shipwrecks. He is the author of Hidden History of Maritime New Jersey.

"My advice to young dancers considering a career in ballet is to just do it. Just keep going, keep moving forwards, with courage and the knowledge that you have the power, ability, and strength of dance inside you."—@gavinalarsen, author of BEING A BALLERINA
Loading Comments...
Comment
×
%d bloggers like this: