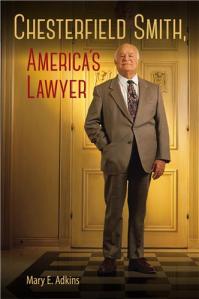 One of the boldest lawyers of the twentieth century

“Adkins’s fast-paced, readable biography of one of Florida’s and the nation’s most influential lawyers and public citizens is a welcome addition. No American had a greater impact on the practice of law and public affairs in America than ‘Citizen’ Smith. Adkins has provided us with a remarkable portrait of this astonishing man.”—James M. Denham, author of Fifty Years of Justice: A History of the U.S. District Court for the Middle District of Florida

“A true gem. Adkins has chronicled the life of one of Florida’s most influential voices in the state’s transition into the modern era. A captivating and interesting read.”—Peter Dunbar, coauthor of The Modern Republican Party in Florida

Chesterfield Smith spearheaded the American Bar Association’s condemnation of Richard M. Nixon during the Watergate scandal. Smith’s damning statement “No man is above the law” turned him into a national figure. But his outsized accomplishments, and equally outsized personality, had already made the Florida attorney a legend in his home state.

Mary Adkins’s biography follows the epic life of a person driven by the motto “do good.” A child of the rural South turned war hero, Smith put himself through law school and rose fast to lead the Florida Bar and mastermind the drafting of a new state constitution. At the same time, he grew his small firm into Holland & Knight, a legal leviathan he imbued with his own sense of public duty. His idealism further manifested in his hiring of women and people of color while his expansive professional network led to a close friendship with future Supreme Court justice Ruth Bader Ginsburg. Adkins also examines Smith’s mentoring of several outstanding legal figures and the community service organizations still influenced by his humane vision of the law.

Mary E. Adkins is master legal skills professor at the University of Florida’s Fredric G. Levin College of Law and the author of Making Modern Florida: How the Spirit of Reform Shaped a New State Constitution.