The Inspiration behind A Revolution in Movement 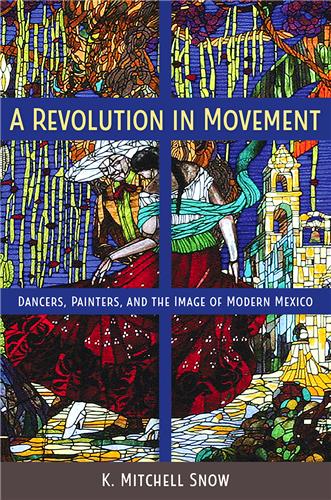 By K. Mitchell Snow, author of A Revolution in Movement: Dancers, Painters, and the Image of Modern Mexico

Visiting the National Gallery of Art’s exhibition Diaghilev and the Ballets Russes, I was drawn to Auguste Rodin’s roughly modeled form of Nijinsky in L’Après-midi d’un Faune, shot through with a barely restrained animal vitality. But it was Roberto Montenegro’s art nouveau evocation of Nijinsky as the Golden Slave in Scheherazade hanging beside it that stopped me cold.

Had I read that label right? Did it really say “Roberto Montenegro (Mexico)”? This work looked nothing like Montenegro’s unsparingly hyper-realistic portrait of himself reflected in a convex mirror that had struck me on my first visit to Mexico City’s Museum of Modern Art decades earlier. What was he doing here next to Rodin and across from Pablo Picasso, his drawing on a fabled cover of a Ballets Russes’ souvenir program? Wasn’t that an honor reserved for the likes of Léon Bakst? 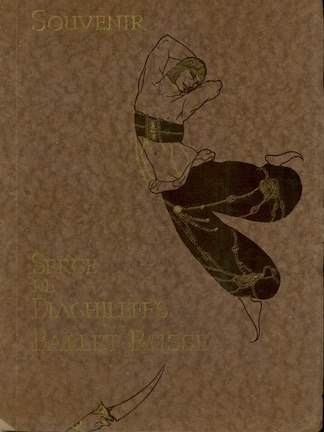 I was vaguely aware that Mexico’s painters had a durable love affair with theatrical dance. One of the handful of purpose-built dance theaters in Mexico is named for painter Miguel Covarrubias in honor of his years as leader of the nation’s dance bureaucracy. When I was working on the biography of Gloria Contreras, whose Taller Coreográfico rehearsed and performed there, she told me about muralist David Alfaro Siqueiros’s arrival at her high school to decorate its stage for one of his daughter’s early modern dance performances. And Gloria’s own career in dance had been urged on by her one-time boyfriend Enrique Estrada, one of the young artists who sought to break with the politically engaged, nationalist imagery of Mexico’s famed muralists. The Diaghilev exhibition suggested there was far more to this fragmentary story.

In fact, Montenegro, along with several of his colleagues, had been studying in Paris during the early years of the Ballets Russes. His housemate, Adolfo Best Maugard, would design Anna Pavlova’s Fantasia Mexicana. His classmate, Carlos Merida, would lead the precursor to Mexico’s National Dance School. His rival, Diego Rivera, would design Carlos Chávez’s ballet HP and work to send Mexico’s modern dancers to Eastern Europe during the Cold War era. Both Montenegro and Rivera were inspired by an exhibition of Russian folk art at the 1913 Salon d’Automne—a display that stemmed from the success of the Ballets Russes—to begin incorporating elements derived from Mexico’s folk art into their paintings.

On their return from Paris it was Montenegro who received the first commissions to create public artworks from Mexico’s new minister of Education José Vasconcelos. When Vasconcelos unveiled Montenegro’s stained-glass window depicting the jarabe tapatío, known in the U.S. as the Mexican hat dance, he took the opportunity to announce his new initiative to decorate the walls of the nation’s schools with murals. A detail of this work serves as the cover for A Revolution in Movement. 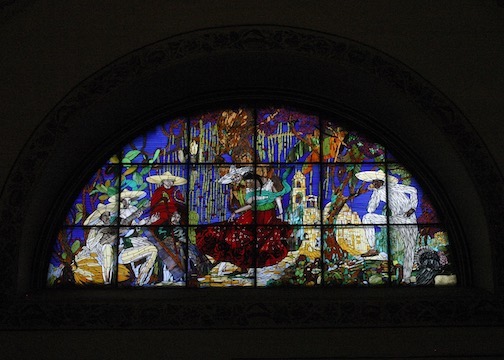 The paint on Montenegro’s first mural for Vasconcelos, created just beneath his stained-glass window, was barely dry when Siqueiros and Franco-Mexican painter Jean Charlot adopted the nom-de plume of Juan Hernández Araujo to attack his nationalist art. They went on to trace what they called his “Mexicanism” to its two “spiritual precursors,” Russian ballerina Anna Pavlova and Spanish early modern dancer Tórtola Valencia. According to Charlot and Siqueiros, Montenegro and his allies in the visual arts relied on “foreign influences (from modern choreography, especially Russian and North American) which seek Mexican characteristics in the PICTURESQUE side of its folk art and its regional peculiarities.”

Everywhere I looked I found evidence that the ties among Mexico’s visual artists and its then nascent community of theatrical dancers were widespread and profound. The aesthetic differences that divided its painters also divided its dancers, but not always in predictable ways. The abstract painter Mérida backed the nation’s socially engaged modern dancers. The socially engaged muralist José Clemente Orozco—equally engaged in an extramarital affair with a leading ballerina—thought that a “revolutionary” form of classical ballet ought to embody his nation’s aspirations onstage.

Although the stories of individual dancers and painters that I discovered were rich with materials documenting their interactions, there wasn’t a single source that linked them together in a narrative whole. Dance historian Margarita Contreras had written a fine short essay connecting the broad currents joining Mexico’s nationalist painters with its dancers; art historian Laura González, an equally exciting catalog on Orozco’s scenic designs for dance. But the underlying record connecting the dots was missing. The birth of state-sponsored theatrical dance in Mexico provides a compelling example of how to create a national identity. It is, in and of itself, a story that merits wider recognition. It becomes even more instructive when partnered with the efforts of its visual artists who were traveling the same path. A Revolution in Movement attempts to illuminate for English readers a period in history that dance historian Alberto Dallal calls “a nation of dancers and artists in full discovery of itself.”

K. Mitchell Snow, an independent scholar and arts writer based in Washington, D.C., is the author of A Revolution in Movement.

This book is currently available at a discount price with free shipping. Order here and use code DSA20, valid through December 16, 2020.

Check out our July e-newsletter (link in bio) for a #Cuba reading list, a selection of free eBooks for July, a preview of forthcoming Fall books from @writeranjanettedelgado and @craigpittman78, recent authors in the news, and more.
Loading Comments...
%d bloggers like this: