Q&A with Simon Wendt, author of The Daughters of the American Revolution and Patriotic Memory in the Twentieth Century 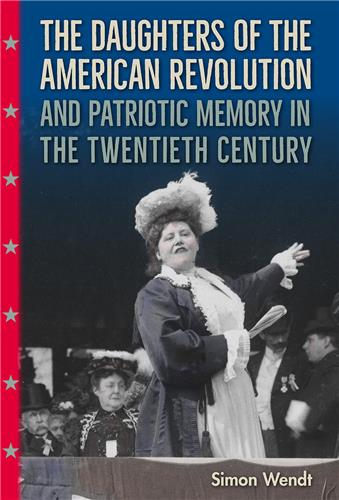 In The Daughters of the American Revolution and Patriotic Memory in the Twentieth Century, a comprehensive history of the Daughters of the American Revolution (DAR), Simon Wendt shows how the DAR’s efforts to keep alive the memory of the nation’s past were entangled with and strengthened the nation’s racial and gender boundaries. Read below for a Q&A with the author.

This book is currently on sale in our Southern Historical Association Virtual Booth. Use code SHA20 for a discount and free shipping, valid through December 16, 2020.

What are the common misconceptions surrounding the Daughters of the American Revolution that persist to this day?

Many people continue to believe that the Daughters of the American Revolution were primarily interested in honoring their own ancestors who fought during the American Revolution. But in reality, throughout its history, DAR members were dedicated activists who financed and erected hundreds of monuments that commemorated the American Revolution, Western expansion, and Native Americans to boost Americans’ patriotism. They also used education to the same end, giving scholarships and prizes to college students and high school students. Finally, during much of the twentieth century, the Daughters were staunch anti-communist and anti-feminist activists who labored diligently to “protect” the American nation and traditional gender roles. While one may disagree with the DAR’s ideology, its activism testifies to the powerful agency of conservative women in U.S. history.

Both organizations were founded in the 1890s, but they had different, albeit overlapping goals. The United Daughters of the Confederacy (UDC) was a southern organization that sought to help the region’s white population cope with the Confederacy’s military defeat by idealizing the South’s antebellum society, including slavery and white supremacy, and by praising Confederate soldiers’ valor on the battlefield. As in the case of the DAR, historical memory was a key element of the UDC’s strategy, since its members used memorials and history textbooks to praise southern soldiers and to correct what they perceived as northern lies about Confederates disloyalty. Unlike the DAR, however, the UDC focused solely on the memory of the Civil War and focused on grievances voiced primarily in the South. The Daughters, by contrast, emphasized national unity in their stated goal to promote patriotism through commemoration, historical preservation, and education throughout the entire country. Despite these seemingly contradictory goals, the two organizations got along very well, primarily because they had overlapping memberships and shared an understanding that white supremacy and traditional notions of gender were crucial to national stability.

For further reading:
Dixie’s Daughters: The United Daughters of the Confederacy and the Preservation of Confederate Culture
Karen L. Cox
With a new preface

Why, in the instance of the Daughters of the American Revolution, did these women take on the role of “preserving” historic memory?

The DAR’s founders felt that American women had an obligation to keep alive the memory of the American past to strengthen citizens’ as well as non-citizens’ national loyalty in the present. From the Daughters’ perspective, knowing and appreciating the nation’s ideals and the accomplishments of its heroes and heroines would instill a lasting allegiance to the United States. In the Daughters’ activism, memory became an essential element of the complex process through which they attempted to convince people that the nation was real and should trump all other loyalties. At the same time, the organization used historical memory to affirm traditional gender roles and entrenched racial hierarchies. For example, the DAR did commemorate the history of Native Americans but romanticized the nation’s violent history of colonial conquest and used their particular interpretations of the past to justify white nation-building and white supremacy. African Americans fared even worse than American Indians; for most of the organization’s history, the Daughters simply ignored their role in and contributions to U.S. history.

Is there a relationship between gender and nationalism that can be seen in the Daughters of the American Revolution?

Yes, absolutely. The Daughters’ nationalist ideology was closely intertwined with gender. Already the founding of the DAR was a form of gendered political protest, since it was a reaction to the decision of the Sons of the American Revolution to bar female members. More importantly, the organization questioned men’s patriotic monopoly and insisted that women should play a key role in inculcating patriotism. The Daughters believed that patriotism, the home, and the family were inextricably connected, a belief that echoed the nineteenth-century middle-class ideal of Republican Motherhood, which called upon mothers to devote their lives to raising virtuous citizens as a patriotic service to the nation. Yet, although the Daughters engaged in patriotic activism long believed to be the domain of men and deliberately challenged male-centered accounts of U.S. nation-building, their commemorations actually reinforced traditional notions of femininity and masculinity. For example, the Daughters insisted that women’s contributions to the American Revolution were as noteworthy and as heroic as those of men, but they never questioned female citizens’ relative lack of power and gave much more room to the memory of heroic men. From the DAR’s perspective, any challenge to traditional gender roles would destroy the nation.

How have modern discussions surrounding race and immigration been influenced by the Daughters of the American Revolution?

Throughout the twentieth century, the Daughters were very vocal in public discussions about race and immigration, and the DAR’s history reminds us that anti-immigration sentiments have been deeply rooted in U.S. society. By the 1920s, the organization’s members became increasingly frustrated that their efforts to “Americanize” new immigrants from southern and eastern Europe had not had the desired effect, which is why they applauded the passage of the National Origins Act of 1924, a law that severely restricted immigration from that region. The DAR was also suspicious of non-white newcomers from Latin America and Asia, who its members believed could never become “true” Americans. Already in the mid-1920s, the organization riled against undocumented immigration from Mexico.

After World War II, the Daughters’ staunch opposition to less restrictive immigration laws continued unabated. Throughout the Cold War they insisted that only white Anglo-Saxon Protestants could be “real” Americans who the Daughters believed should be vigilant to protect the nation from non-white intruders. When the Immigration Act of 1965 brought the liberalization that the Daughters had sought to prevent since the 1920s, the Daughters and like-minded conservatives were shocked and expected chaos and national decline. In the 1980s and 1990, as the number of immigrants reached new heights, the DAR continued to warn that unrestricted immigration would jeopardize America. Its leaders predicted that undocumented immigrants from Mexico would contribute to higher crime and unemployment rates, while also putting a strain on the country’s welfare system. Fearing that the new wave of foreigners would also erode American patriotism, the DAR denounced more liberal approaches to immigration such as bilingualism and multiculturalism. In the early twenty-first century, the DAR’s views on immigration have changed little. While the DAR has been less vocal about this issue in recent years, it is conceivable that many of its members continue to regard immigration as a threat to the nation.

What steps would you suggest people take to educate themselves about the history and lasting impacts of the Daughters of the American Revolution?

The DAR’s website (https://www.dar.org/) would be a good place to start, since it contains a wealth of information on the organization’s various activities in the past and the present. For those who’d like to delve deeper into its history, I recommend having a look at the DAR’s magazine. All issues of the DAR’s publication (from the 1890s to the present) are accessible on the organization’s website: services.dar.org/members/magazine_archive/default.cfm

If people are interested in learning more about the experiences of African American DAR members—who were allowed to join the organization only in the late 1970s—they should visit https://www.daughterdialogues.com, a website exclusively devoted to “Daughters of Color.”

Simon Wendt, associate professor of American studies at Goethe University Frankfurt, is the author of The Daughters of the American Revolution and Patriotic Memory in the Twentieth Century and The Spirit and the Shotgun: Armed Resistance and the Struggle for Civil Rights.