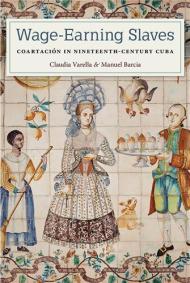 “This book offers the first social history of ‘coartados,’ enslaved people who made partial payments towards their manumission price, in Cuba’s nineteenth-century slave society. It is a fascinating window into their everyday experiences and into the centuries-long efforts by Africans and their descendants to assert control over their lives, their bodies, and their labor.”—Alejandro de la Fuente, Afro-Latin American Research Institute, Harvard University

“Examining the historical and lived experiences of the enslaved, the authors convincingly document that the road to manumission by self-purchase was a lengthy journey marked by a constant state of limbo between slavery and freedom. Without comparison, this is the most thoroughly researched and detailed study of the Cuban process of coartación to date.”—Matt D. Childs, author of The 1812 Aponte Rebellion in Cuba and the Struggle Against Atlantic Slavery

“Covering a period of around 100 years, the authors present a dynamic picture of slavery and emancipation in nineteenth-century Cuba. Tracing the evolution of coartación and other legal arrangements provides a novel window on a chaotic system, characterized on one hand by corruption, tax evasion, forgery, and bribery; and on the other, by slave agency and resilience.”—Luis Martínez-Fernández, author of Key to the New World: A History of Early Colonial Cuba

Wage-Earning Slaves: Coartación in Nineteenth-Century Cuba is the first systematic study of coartación, a process by which slaves worked toward purchasing their freedom in installments, long recognized as a distinctive feature of certain areas under Spanish colonial rule in the nineteenth century. Focusing on Cuba, this book reveals that instead of providing a “path to manumission,” the process was often rife with obstacles that blocked slaves from achieving liberty.

Claudia Varella and Manuel Barcia trace the evolution of coartación in the context of urban and rural settings, documenting the lived experiences of slaves through primary sources from many different archives. They show that slaveowners grew increasingly intolerant and abusive of the process, and that the laws of coartación were not often followed in practice. The process did not become formalized as a contract between slaves and their masters until 1875, after abolition had already come. Varella and Barcia discuss how coartados did not see an improvement in their situation at this time, but essentially became wage-earning slaves as they continued serving their former owners.

The exhaustive research in this volume provides valuable insight into how slaves and their masters negotiated with each other in the ever-changing economic world of nineteenth-century Cuba, where freedom was not always absolute and where abuses and corruption most often prevailed.

Claudia Varella is adjunct professor in the Department of Education at the International University of La Rioja. Manuel Barcia is chair of global history at the University of Leeds. His many books include The Yellow Demon of Fever: Fighting Disease in the Nineteenth-Century Transatlantic Slave Trade.