A Childhood among Cacao Trees 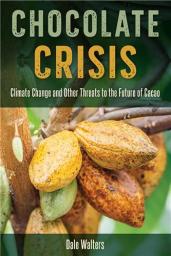 By Dale Walters, author of Chocolate Crisis: Climate Change and Other Threats to the Future of Cacao

This book is available at a discount price through June 30, 2021. Order here and use code FNPS21 at checkout.

It is funny what you remember from your childhood. My first childhood memory—I guess I was three, perhaps four years old—is of sitting with other children in a neighbor’s house in Trinidad, watching cartoons. Not just any old cartoons, but Looney Tunes—Bugs Bunny, Daffy Duck, Yosemite Sam. A love of cartoons has stayed with me all my life and if I feel stressed and need to relax, I will sit in front of the TV and watch cartoons.

Another early childhood memory is walking through the cacao trees with my dad. Although I was born in Wales, my Welsh father had married a Trinidadian woman and they decided that life in the Caribbean was for them. My dad began working on a cacao estate when I was only seven or eight years old.

The cacao estate was in Toco on Trinidad’s spectacular northeast coast, which, at that time, in the early to mid-1960s, was remote and difficult to get to. I loved it there. The estate was on the slopes of the Northern Range, overlooking the rocky coastline and the sea. Northeast from Toco the Caribbean Sea meets the North Atlantic Ocean and 20 miles away lies Trinidad’s sister island, Tobago.

I remember tramping up the hill to the cacao trees, which were dwarfed by giant, red-flowered Immortelle, and entering a world of dappled light, of a stillness so intense that the sounds of birds and insects were somehow intensified. It was utterly magical. I just loved being there. Later, after we had moved to Rio Claro in the southwest of Trinidad, walking among the cacao trees became a different experience as my dad pointed out various ailments afflicting the cacao trees. He was most concerned with black pod and would show me pods that, instead of being all yellow or red, sported irregular brown or black patches. Sometimes, these patches coalesced to cover much of the pod. Then there was witches’ broom, that shoot- and flower-distorting disease, which was spoken about in hushed tones. My dad, and many of the other workers on the estate, told me that these two diseases could destroy a cacao crop. I was stunned and intrigued. In school, I was hooked on science by this time and I became increasingly interested in not just cacao, but plants in general, and, perhaps unsurprisingly, I developed a fascination with plant diseases.

When the time came for me to go to university, I chose to study plant science. I could have stayed in Trinidad and studied at the St. Augustine campus of the University of the West Indies (UWI) for my undergraduate degree. After all, UWI had, and still has, a fantastic reputation for agricultural education and for cacao research. But we had visited my place of birth in Wales, Tenby, for a year, and I had already met the person who was to become my wife. For that reason I was determined to study in the UK, but I had no idea what university to choose. It was too far to travel for an interview and so I had to choose my preferred place of study without visiting. Although my knowledge of UK universities was poor, I struck it lucky one day. I was sitting in the estate office, waiting for my dad, and I picked up a magazine. It happened to be an agronomy magazine and flicking through it, I came across a very interesting article by a Professor Louis Wain of Wye College, University of London. I decided there and then that this was the place for me.

This might be an unusual way of choosing where to study, but, luckily, it worked for me. It was a small college in the lovely Kent countryside, and it suited me well. I enjoyed my time there and it was here that my lifelong obsession with plant pathology began. Although I took classes on mycology, plant pathology, plant virology, and crop protection, I became increasingly keen on plant physiology and biochemistry. One class I took in my final undergraduate year dealt with the physiology and biochemistry of plant disease, a topic known then as physiological plant pathology.  It covered how pathogens infected the plant as well as how the plant responded. I became so interested in this area that I ended up doing a Ph.D. on how powdery mildew affected root function in barley plants.

But during my undergraduate days, my interest in cacao and its diseases never left me. In my final year I chose the epidemiology of black pod disease of cacao as my special study. In fact, I was so fixated on cacao that I even carried out a study on cocoa swollen shoot disease for the plant virology class I was taking. I spent the summer before I started my final year in Trinidad, visiting my family. I took the opportunity to visit the library at UWI in St. Augustine, where I was able to access a lot of published information on black pod. This was a magical time, a time I remember fondly.

My fascination with cacao and its pests and diseases never left me. I can still see myself with my dad walking through the cacao trees. I can feel the warm, humid stillness beneath the canopy of cacao and shade trees. When I retired, I decided to follow my lifelong obsession with cacao and its diseases by writing a book. I am so glad I did because it was incredibly enjoyable, rewarding, and healing. It took more than half a century, but I finally got to return to cacao. Funny how life works out.

Dale Walters is emeritus professor of plant pathology at Scotland’s Rural College. He is the author of many books, including Chocolate Crisis: Climate Change and Other Threats to the Future of Cacao and Fortress Plant: How to Survive When Everything Wants to Eat You.